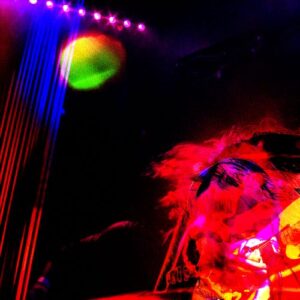 Gen and the degenerates have been tagged as alternative punk rockers, party starters and agents of chaos… Degenerates by name and by nature. This post punk / alternative rock quintet comprise of Genevieve Glynn-Reeves (vocals), Sean Healand-Sloan (guitar), Jacob Jones (guitar), Evan Reeves (drums) and Jay Humphreys (bass). They release their debut EP this week `Only Alive When In Motion` which encompasses subjects that range from dealing with mental health and addiction to understanding one’s own sexuality and the dangerous deifying of celebrities by putting them on pedestals.

This five track extended play opens with `Crying War` with a beating drum beat, throbbing bass line some quite blistering guitar riffs and vocals that seem to bring the whole thing together and really command you to listen. The singer has shared that the song is almost a battle cry and was inspired by traumatic past relationships in adult life and a recognition that she has grown to be stronger, wiser, and more resilient. It does have that defiant sound and i`m sure will prove to be encouraging to others who are currently experiencing difficult situations. We have a track in `Adore` that tackles undiagnosed mental illness and what Gen coins as “a pretty gnarly eating disorder”. It has a real foot tapping vibe that will have you nodding your head and in my case playing air drums. We have some scorching guitar riffs shared throughout and again that delightfully insolent vocal delivery.

When asked about `Girl God Gun` the singer shared that “I wrote this song out of a frustration at having my art and work viewed primarily through the lens of being a woman, when there are so many other things that I identify with more strongly. It’s written as a stream of consciousness response to that frustration every time I’m asked, “what’s it like to be a woman in music?” and it depicts both the real and abstract things I identify with more than the label of Woman.”  It`s another mesmerising earworm of a number with a pounding drum heartbeat, plenty of shredding guitars and vocals that to me were like a spider enticing a fly into it`s web, dangerous but irresistible. Next up we have `Wild Thing` a number that was inspired by the classic The Troggs track of the same name. It`s a real rock out and becomes quite anthemic at times. Gen’s mother took to singing her to sleep with the Troggs version in a repurposed lullaby and she believes that it really did have something to do with her turning out the way that she did. I does have a kind a call and response element and I can see this going down a storm when shared live.

This release closes out with `Burn Your Pedestals` a track that takes a long hard look at the status and potentially misplaced power of celebrities. It`s a number that races along at 100 mph and has some chugging guitar riffs and a distorted solo towards the end that would give Angus Young a run for his money!

I must admit when I read that name Gen and the Degenerates, I thought nah, not for me but as the saying goes never judge a book by its cover and I’d now add never judge a band by it`s name. This was a cracking introduction for me to this band who are not afraid to tackle some difficult and uncomfortable subjects but relay them not in a preachy way but through some anarchic and searing rock anthems, which to me has much more power and effect.

The group are on the road with Skunk Anansie next month and that`s a combination that`s too good to miss.