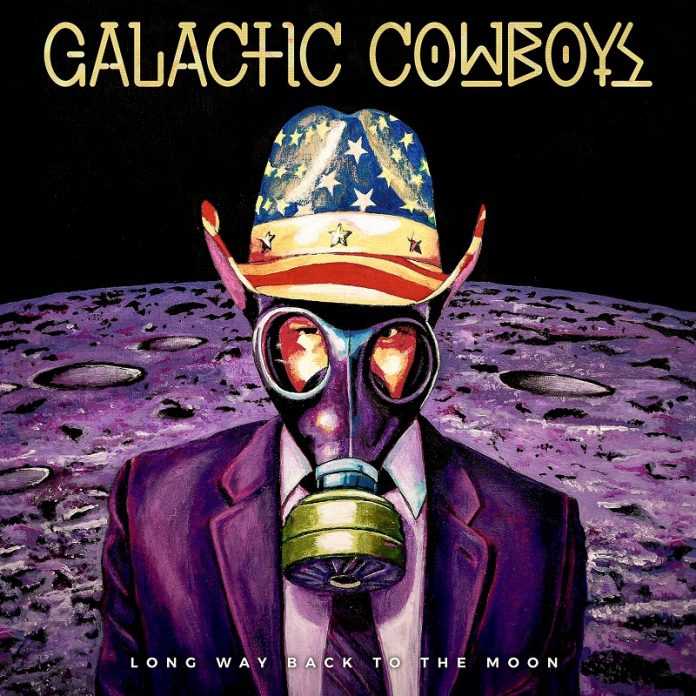 “What a shame, they should have been so huge. Where’s the recognition they deserve. Missed the boat. Their genius overlooked, apparently the masters aren’t concerned.”

Those are lines from one of the bonus tracks on “Long Way Back To The Moon” and whilst “Believing The Hype” might just be a fun romp and send up of music fans in general, it is equally possible that it might be about the band themselves.

Their story as the Next Big Thing is paralleled in the UK by that of The Wildhearts (and listen to the backing vocals on “…Thing” and then tell us that there aren’t musical similarities too), but Galactic Cowboys tale of woe is pretty spectacular.

Signed by Geffen for a ridiculous advance, they were side-lined by the fact the label had Guns N Roses at the time, and then when they finally released their (brilliant) debut album Geffen had another band. You probably know them. They loaded up their guns and brought their friends. Then, bluntly, the Texans were a little too hard to put in the neat boxes that magazines like. Here was a band that basically invented their own genre. Thrash meets the 60s pop harmonies nowhere else in music. It is instructive, perhaps, to look at the bands the Cowboys toured with. Anthrax and Dream Theater. They’d have fitted in with both too.

They kept going for a while, releasing albums and re-jigging line-ups, but in reality nothing else matters except this: This is the first album from their original members in almost 20 years. That makes “Long Way Back To The Moon” the first album that the real Galactic Cowboys have made in nearly two decades.

Opener “In The Clouds” goes back further than that too. It was the first song ever written for the band and the song that vocalist Ben Huggins had to audition with. It has all the hallmarks that made them so wonderful (and you have to remember back in 91 the crossover thing was basically just Faith No More to kids growing up in England as MV was). Massive thrash infused grooves, huge dreamy melodies, and rip-roaring bass.

As a welcome back it is hard to beat.

Lift off – you might say – achieved, the band merely set about doing what they do so well. “Internal Masquerade” comes in with some angular guitar, then chugs along with a hard rock heart and a chorus you can sing in seconds (most of the album has this to be fair), while “Blood In My Eyes” is a genuine highlight. Part Pantera, part Faith No More, part Mama’s And Papa’s west coast fun, it is the perfect snapshot of what they always were about.

“Next Joke” has a bass groove not heard since Suicidal Tendencies, and it doesn’t half sound like some lost Dream Theater song (Mike Portnoy was a huge fan). “Zombies” on the other hand is made solely for the moshipit and “Drama” is arena bothering rock n roll of the highest order.

“Amisarewas” is sort of like this albums stab at a ballad, but straight up balladry was never really the Galactic Cowboys way, instead this is an assault on the senses that puts everything in ultra HD. That they follow this up with the brutal “Hate Me” is everything you need to know of their contrary nature, and then “Losing Ourselves” is sort of like Symphony X if they were unhinged.

As things come to an end “Agenda” is like their mission statement – although that seems like too corporate an idea. Nonetheless, the chorus of “From where I sit, I just don’t fit into the agenda. If you’re like me, fight to be free, of the agenda,” seems like a definition of their career.

Coming back after twenty years is brave. You need to come back with something that doesn’t detract from the legacy you’ve created. “Long Way Back To The Moon” does the opposite, it adds to the legend of Galactic Cowboys. One of the boldest and brightest metal records of the year. Saddle up, its not like any ride you’ll get anywhere else.

Previous article
New Members Of The Almanac
Next article
Here Is The News: Get Naked With Temperance Movement