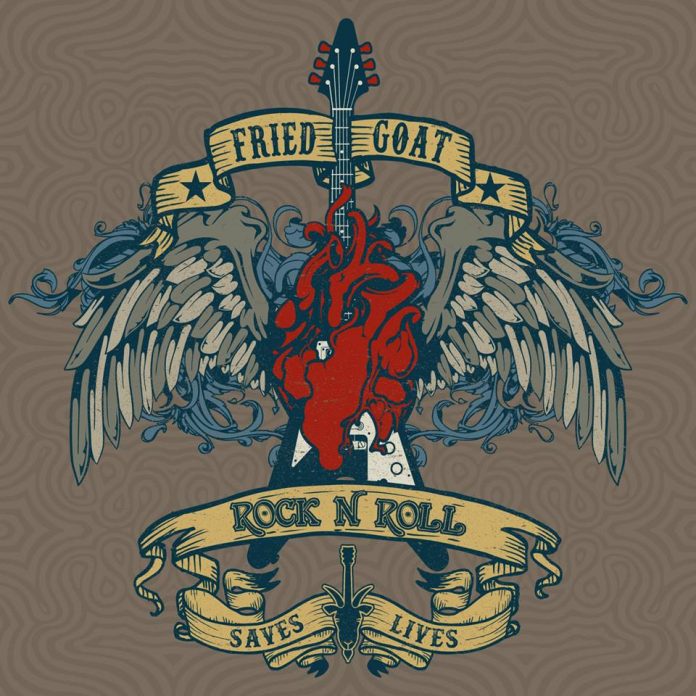 There are many reasons why, generally, I prefer music to people. But here’s one: Music is a lot easier to understand.

The other day I found myself in a social occasion with a few people that I didn’t know. They were perfectly pleasant and it was a decent evening, but it meant small talk. Small talk is horrible. Blokes like me panic at small talk time and we don’t like it.

Still I got through it and on the way home I put this on.

I’d not come across Fried Goat before. This is their third album – and its a blinking long thing at 16 songs too – but it was just what I needed.

If socialising is out of my comfort zone, then to be fair, bands called Fried Goat? And with an album called “Rock N Roll Saves Lives”? Oh come on, that’s not even a challenge.

A spot of hard rock. The odd Skynyrd reference, a touch or two of Dan Baird. Some reference to barbecue, grits, and the idyllic view of the USA’s south and Bob’s Yer Uncle. Job done.

Now, to be fair, all those things are there, but I was only half right. See, Fried Goat might have a tasty flavour, but it’s not necessarily the one I thought of.

Take the last song, for your first example. “Light Of Day”. The Springsteen classic. The one he never put on a studio album, but is ace when he plays it live. That one. If you know it, you love it. FG have turned it into an acoustic ballad, the scamps.

That is because they are pretty original. And that’s why they are really very good.

That one, in fairness comes about an hour after the first time you went: “oooooh ok….”. “LA Moon” is a wonderful opener, but it is melodic, its pop orientated. Think a little mid-90s like Counting Crows or The Rembrandts. And crikey its catchy.

The fact that the band appear to have four different singers means they, a little like The Eagles, never let you settle. “China Made Me” has a hard rock edge, “Anything” is an Americana ballad, but one of rare class, while “Rest Again” – and I don’t think anyone involved will be too upset at the comparison has a bit of Neil Young about it.

But if they are rockin’ in the free world, so to speak, then they’re doing it with the bluest of blue collars. “Long Goodbye” – the one that gives the collection its title – is pure honky tonk and in a very real way it explains the whole thing: “most things I figured out the hard way” reveals the first line. “guitar came as natural as can be…..” and maybe this music is in their blood.

“Make You Cry” has the power chords of John Mellencamp, and “Face Tattoo Blues” is as interesting as its title. “you lost your way. On a Tuesday” is a pretty cool couplet, any way you look at it.

Two things are striking about this in the main. First, just how many different styles there is here and second just how strong the album is. 16 songs. I know what you’re thinking. There’s got to be some filler by the end. I thought that too. There isn’t.

“Circus K” has a bit of a George Harrison thing going on, the balls out indie style rocker of “Gumbo Knows” changes the vibe completely – actually sounding like Kula Shaker to me anyway.

“Safe From Harm” had me reaching for Jason Isbell references, and any time that happens is just fine, and the dark, ominous and rather bleak blues of “Henry’s Glory” is but another left turn on a record full of them.

Rock N Roll probably does save lives. Others can debate that. What I can most certainly tell you is Fried Goat are rather good at it. And they don’t give a good God Damn about your preconceptions either.