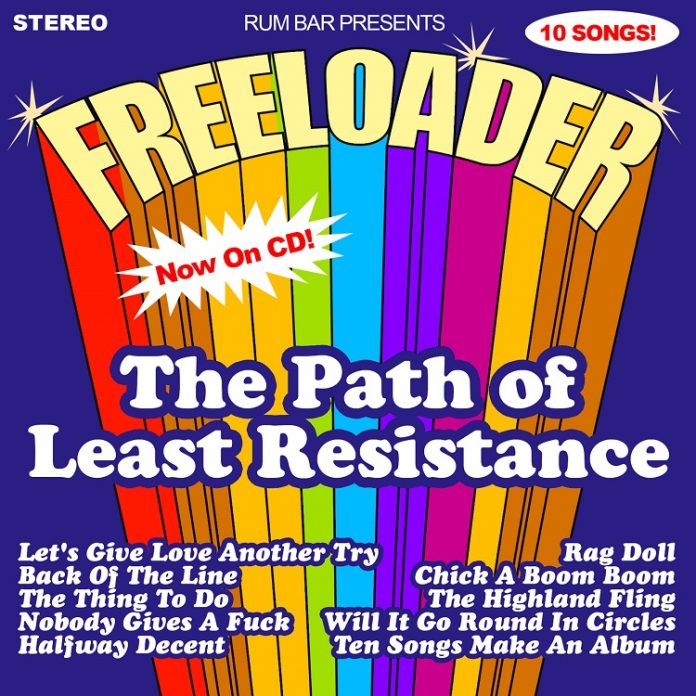 Sometimes the beauty is in the simplicity, and that is the case here with Freeloader.

Imagine for a sec that you are Nat Freedberg. You were in a band called Upper Crust, before in the early spring you stuck a solo album out. But you had seven songs that were a bit too heavy for the singer/songwriter stuff you were doing.

What do you do?

Well, what I’d do is procrastinate, cos that’s my skill. Nat, though is made of sterner stuff than me, so he gathered together a load of mates from other bands (one of his former Upper Crust brothers, Jim Janota belts the crap out of the drums, Charles Hansen from MV faves Justine and the Unclean does the leads, and Jim Hanson from a load of outfits I don’t know from Seattle does the bass) and sticks them together with a couple of covers.

That is – if you are keeping track – nine tunes. And albums, apparently, have to have ten. So Nat, bless his heart, writes a closing song called “Ten Songs Make An Album” and hey presto, the job is done.

Now, there’s two things here. First, the song is superb. One of the best here – and there’s some crackers – but nothing, I’d argue,  better exemplifies the no frills approach to rock n roll than that, right there.

To be fair, “Path Of Least Resistance” is not an album that requires too much more analysis, in all honesty. “Let’s Give Love Another Try” the opener, sounds like those bluesy LA Rockers, from Rhino Bucket to Blackeyed Susan that I bought a load of in the late 80s, and it happily, and without any type of self-consciousness, rhymes “miss you” with “kiss you” and doesn’t even care.

The rest, basically, is more of the same. “Back Of The Line” underlines my long-held belief that any song that sounds like AC/DC must rule. It is the law. “The Thing To Do” is just a little bit glorious. A sort of alternate take on Religious Education, the sort of lesson that – had we had it at Langley Secondary School in 1987 –  I might paid attention too.

“Nobody Gives A Fuck” is a stark warning to anyone that looks for pity can look elsewhere, and its chug is absolutely without remorse. That all being said, “Halfway Decent” is genuinely brilliant. Love songs should be like this. Indeed, I’ll leave this verse here without further comment:

“I admit, baby, I ain’t denying. I look a little bit like Frankenstein. But then, they say true love is blind. Baby, you wouldn’t even have to look, you could even read a book, while I sneak up on you from behind.”

“Rag Doll” is one of the covers. It’s fair to say that unless the Four Seasons did an album of power pop that I don’t know about, then it never sounded like this, and the guitar line here is outstanding.

“Chick A Boom” goes disco – a bit – and is supremely catchy, and there’s not a lot to say about “The Highland Fling” except that Freedberg rhymes “lassie” with “piece of assy” and it gets more ludicrous from there.

The glam slam of “Will It Go Round In Circles” is better (but then that wouldn’t have been hard……) it retains the funkiness of Billy Preston’s original but does things its own way.

So, having spent 550 words discussing something simple the overriding feel is this: if you like rock n roll, you’ll like this. It’s impossible to resist.