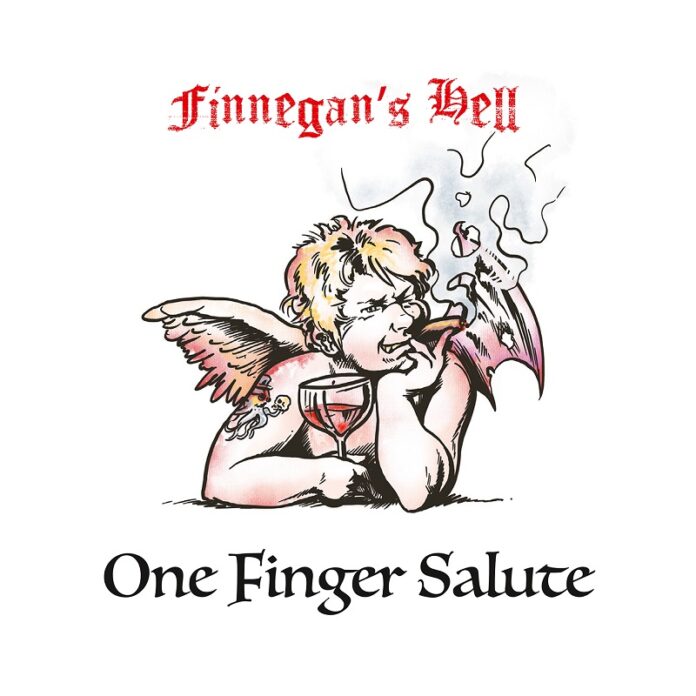 When I was a kid, I was gutted to find the Ramones weren’t brothers, but I am proper confident (ahem!)  that The Finnegan family must be proud. Pabs Finnegan, Mick Finnegan, San Finnegan, Cozy Finnegan, Ace Finnegan (and Old Roxy….must be a family friend?) have come from Sweden to make their statement with “One Fingered Salute”.

And, yes before any weirdo emails me to tell me, I know those aren’t their real names, but if they were brothers that’d be as likely as the fact that the best Celtic Punk record of the year coming from Sweden. But we are where we are and this, frankly, is rather good.

In 25 minutes and 5 seconds precisely, Finnegan’s Hell cover about 47 genres, offer up some mighty social commentary, political correctness goes out the window, some of it is actually funny, and there’s more tin whistle than Belfast in marching season.

“What Have You Got In The End”, the opener is a reasonable signpost to most of it. It’ll let you know whether you like it or not, that’s for sure. Pabs’ gravel vocals, the whistle of Mick and the idea that every chorus should be so catchy Pfizer have developed a vaccine against it.

The title track chucks the “F” word around liberally. Less an “F” bomb as a full on barrage, and “Mickey Finn” takes a thrash like energy to things, basically, if you slipped the offending pill into their drink, I’d be worried.

FH are one of the hardest bands to quantify that you’ll find. Take “Read My Lips” appears to wonder what would happen if you added a Motorhead bassline to a folk song (and popped to your missus’ sisters at midnight) and when we mentioned, social commentary? “Godforsaken Town” has it you covered. Let’s mention The Pogues, because we sort of had to at some point, right? This one is right in that sweet spot.

If this had a Side B, then it starts with “Run Boy Run”, which is one of the best things here. The lyrics are…..sensational….and we’ll say no more than that. It thunders about doing punk rock in the style of Jason And The Scorchers, while the whistle seems to be playing “By The Bonnie Banks O’ Loch Lomond”. Whatever. It’s cool.

“Comin’ After You” is nearly a ballad, and its more reflective. It seems to be ready for a gunfight, but its probably best not to ask, while “I’ll Make It Up To You” is like the anti-love song. It’s not going to be the verse in many Valentine’s Day cards come February, but with so much loveable charm that you just know they get away with it.

“Nothing Left To Lose” which ships up to …urmmm… Malmo? Arguably has the best line on this record: “I don’t care about the future, I don’t care about you, if you’ve got to take the kids then take the dog too” is glorious, so is the song. While “Oh Death” is nearly a proper trad folk song, except it can’t resist being a little too heavy to fit the box.

And that, basically is Finnegan’s Hell. They’re a bit like lots of things, but a copy of nothing whatsoever. “One Finger Salute” is wonderful, an easy listen and the most fun you can have in less than half an hour. If, like me, you have no attention span whatsoever, this is the band you’ve been dreaming of.

Previous article
BAND OF THE DAY: KEYS
Next article
A HEEP OF REISSUES