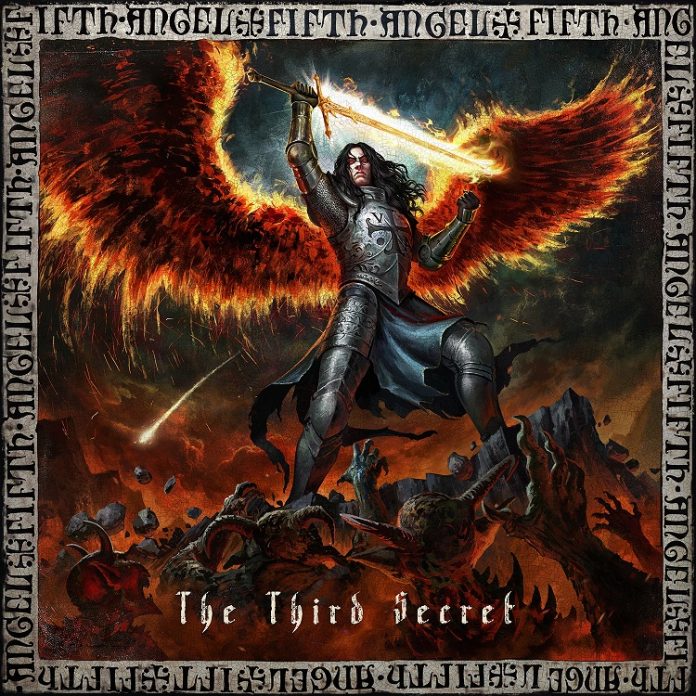 Back in the late 1980s me and my best mate used to buy Kerrang! religiously. The best bit was the Flexi-Disc, attached to the front which gave us some great bands to love (back in these pre-internet days that’s all we had).

One of them had a track by Fifth Angel on. Their name sticks out in my mind because they were from Seattle like Queensryche and played metal a little bit like them too.

They were the next big things, back then. They were worth the hype too. I can remember buying their first album on import in a record shop that is long gone (what I didn’t know, until I read the notes that came with this was that the debut was also the first time Terry Date had produced a record. He later went on to work with the likes of Pantera, White Zombie and The Wildhearts) and, as so often happens, I lost touch with them afterwards.

It was, to be honest, something of a surprise, that I received something from Nuclear Blast a few months ago that said the band were back – and moreover were back with a new album. Their first for almost three decades.

The surprise turned to shock when I heard “The Third Secret”. It is absolutely superb, but so good were they in the dim and distant, that I don’t know why I doubted them. You’d say it was rolling back the years, but its not really. Across the 10 songs it is classic and classy metal all the way. Eras do not matter in that context.

Two of the original members are here. Drummer Ken Mary – who is best known, perhaps for his time with Alice Cooper – and bassist John Macko. Singer Ted Pilot isn’t in the biz anymore (working as an endodontist) but they’ve replaced him with Kendall Bechtel (guitarist on their second record) and this album sees them a trio.

Bechtel is in astonishing form throughout “….Secret” – actually in many ways is his album – he propels the songs and where he takes them is always compelling.

“Stars Are Falling” ushers itself in on the back of some machine gun drumming, but it is a feature of this that there is always a crunch and chorus.

The brilliant “We Will Rise” is an example of what metal can be in this modern age but never ever seems to be. Put simply there are no kids in skinny jeans screaming and grunting at you here, just great songs expertly played.

It also must be said that even the more epic ones, like “Queen Of Thieves” eschew the more OTT. Yes, there’s bombast here, but only in a Maiden type way. “Dust To Dust” has an almost sleazy air and any song that starts with a solo has to rule.

“Can You Hear Me” has a stadium shaking – and at one point Fifth Angel looked set for that – soaring thing going on, but “This Is War” is more hard rock – think Edguy really – and even though “Fatima” in other hands would be some labyrinthine epic, here it is less than three minutes.

The title track is tucked away towards the end, but is better than that, its bass groove builds to something special, and it ends with a pair that get their fists in the air and party like its 1989 – and both “Shame On You” and the even more denim and leather clad “Hearts Of Stone” rocket along like the last 30 years – or that other movement from Seattle that ruined music for a while (sorry but it’s true) – hadn’t happened.

It’s probably more a comment on the fact I am getting old than anything else, but great metal albums have been scarce recently. Dee Snider’s was ace, and there’s this. Fifth Angel – like Dee really – had no right to make one this good. But there we are, they did, and lets not keep it a secret.

Previous article
PLENTY TO CROW ABOUT
Next article
BAND OF THE DAY: VLTIMAS