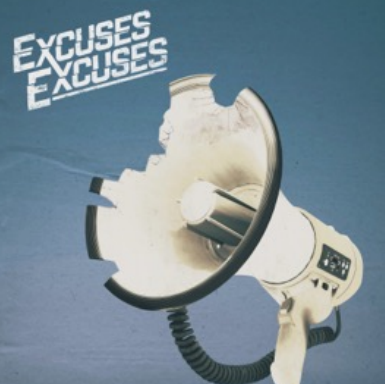 Excuses Excuses are – according to their bio on Twitter – “3 Scrubs Making Music”. I’m old. I don’t know what a “scrub” is (beyond they didn’t get love from TLC back in the day) but here’s what I do know: Three piece bands are almost always ace. There’s a balance to their stuff. And that holds true for “Listen Up” too.

Their debut album, it comes on the back of a load of singles (one we’ve been proud to premiere on these pages) and we might as well start with it. “The Meaning Of Life”  comes towards the end of this, and it’s typical of what “Listen Up!” does as a collective work. Big sounds, big meanings. There’s a pathos to these words for a band so young (that’s not an attempt to patronise, it’s merely a fact).

Singer Kyle Wilson deals with this catharsis in a breezy fashion. “Would you dance with me mother and look me in the eye?” he questions here, “since you’re stuck with me as your child, I want to be the one to make you proud.”

This longing seems to inform the others too. The title track was the other we were familiar with. I reviewed it in April because it’s a brilliant song. Simple as that. You can pluck all the modern references  you like (Sick Joy spring repeatedly to mind) but it’s a couple of other bands you keep coming back to. Billy Talent – and I imagine no one here is fussed at that – but also back at the start of this century there was a band that I adored called Johnny Panic. None of these three remember them, probably, but my goodness the same angular melodies and catchy, bouncy choruses are here.

And that bounce? It’s the hallmark of EE (the signal if you like?) “Say” which deals with peoples expectations and rips them up, races out of the blocks to start and nothing lets up. Nothing.

“Feeling Sorry” is a Duracell bunny. It’s not stopping. These boys mean every word. It’s impressive how serious these ruminations on mental health, and modern life (maybe the two are inextricably linked?) are, but its impressive too how little excess fat is here. “Nicotine” is as lean as can be, but you won’t ignore it.

“Wasted Alone” is a sort of ballad, but its one of tenderness and friendship and the drums pin down the record throughout, but never more than on “Break Down The Silence”. The reflection in “Hardship To Sail” is wrapped around a riff that simply screams “ambition”. This is a band that has dreams, I’d wager along the lines of wining people over one at a time. Certainly this sounds like a statement of intent.

“Listen Up!” doesn’t sound like a polite request, it sounds like an order and Excuses Excuses are seemingly prepared to do anything it takes to make sure you understand that.