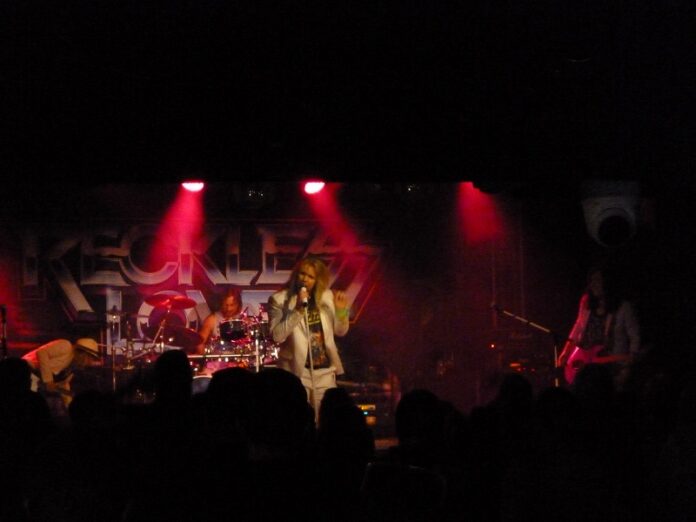 First up tonight are Collateral who having seen them previously have in lead singer Angelo Tristan somebody who was born to be on stage and tonight he`s dressed as a circus ringmaster. It`s a shortened set which pans out at abort thirty minutes and these guys certainly make to best of the time they were allocated. The set which was mainly culled from their 2020 eponymous release included really catchy numbers such as `Mr. Big Shot`, `Merry Go Round` and `Midnight Queen` but they also threw in their forthcoming single `Sin In The City` which I have to say is a banger. It`s always a pleasure to catch up with these guys regardless of the time constraint and they`re back in Wolverhampton in October so we don`t have to wait too long to see them again in the West Midlands.

It`s hard to believe that I first saw The Treatment on a free entry Powerage Records package tour at the Queens Hall in Nuneaton in 2011. I`ve seen them a fair few times since then and they always deliver. They kick off with a couple of oldies with the grimy `Let’s Get Dirty` and `Let It Begin` which raced along before sharing three cuts off last year`s `Waiting for Good Luck`  release with the bluesy slow burn `Eyes on You` driving blistering `Vampress` and questioning `The Devil in The Detail`.

`The Doctor` is a scorching number from out of the band`s vaults before the fellas share `On the Money` and `I Bleed Rock+Roll` and have the audience jumping up and down. This hour long set closes out with another newish track ` Wrong Way` before they leave us with `Rat Race`. A decade on since I first saw them and a few line-up changes on route The Treatment have almost become England`s elder statesmen of heavy rock. These guys were replacements for the previous co-headliners who pulled out and I have to say they took their opportunity and smashed it out the park.

Reckless Love take to the stage in white suits and look ready for a night in a warm climate not a night of metal mayhem in England`s second city, They have a new album `Turborider` and open  tonight`s show with the title track. We head back in time with `Monster` and `Back to Paradise` before a searing cover of our local boy, The Prince of Darkness`s `Bark at the Moon`.

The fellas found a local bar NQ64 in the Custard Factory complex during the day which is full of retro game consoles so share `Kids of the Arcade` which they follow up with the quite melodic `Outrun`. The brief guitar solo which is `Prelude (Flight of the Cobra)` leads us into `Like a Cobra` before the boys share the anthemic dreamy sing a long `Edge of Our Dreams`. We return to the latest release for `Eyes of a Maniac` and `Prodigal Sons` before heading back in time for the thumping `Young & Crazy` and earworm of “On the Radio` which closes out the show.

We don`t have long for the quartet of Oli, Pepe, Hessu and Jalie to return for a three song encore with `Animal Attraction`, `Night on Fire` which had all and sundry singing along with the Whoa Whoas and the chorus line, but it`s `Hot` that has the audience eating out of singer and showman Oli`s palm before the show is over and we all head home.

I`d never seen Reckless Love before and I have to say I was really blown away by their genuine humility to be back on the road again, their captivating melodic tunes and the interaction they had with the audience. If there`s any justice in this world, these guys will be returning to much bigger venues next time they tour.