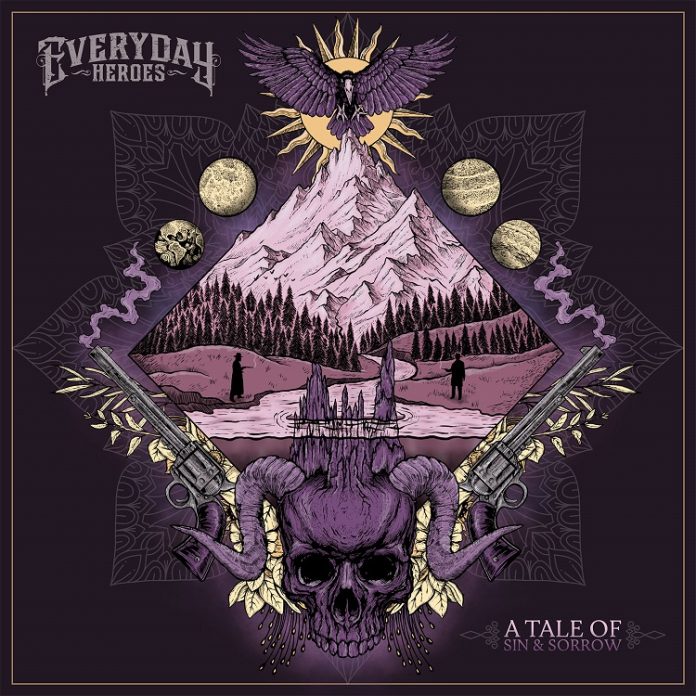 I guess it’s the way of the world, and certainly I am as guilty of this as anybody, but as I said to a mate of mine the other night on Twitter, when it comes to music I don’t have a “thing”. I am always looking for the next thing.

That’s cool, mostly, and it drives me to review so many records – and the day I stop searching for stuff is the day I pack in – but just occasionally it means you forget the wonderful bands you already know.

This, like the recent album from another South Wales band, Buffalo Summer, is one of those times.

I first became aware of Everyday Heroes back in the Autumn of 2017 (they were a band of the day back then) and their EP’s thus far have been superb, but when there is so much great music at the moment (and there really, really is) it is easy to forget that a band you had high hopes for at the time still hadn’t put its debut record out.

They have now, and goodness me, it’s good.

You know the sort of album it is from the moment it starts up. There’s some vaguely southern rock about the riff. Black Stone Cherry are going to get mentioned in dispatches, or if you want to look a bit closer to home, then pretty much think of a more muscular version of The Answer, and you’re there.

That opener is more than just a riff, though. Nope, “Texas Red” casts them as outlaws, on a steel horse they ride, the rock n roll gunslinger. You know the drill. So do they.

You could say “Find My Way” repeats the dose, but then they all do, and anyway that would be to miss the point. Instead revel in the spirit of it. The whole idea that “it’s a dangerous game with a high price next to your name.” If rock n roll is about being on the wrong side of the law then this embodies that spirit. Plus Luke Phillips – who also sings – rips a solo out worthy of Richie Sambora.

And if they are wanted (dead or alive)” as it were, then the beefed up presence of Dan Richards on rhythm gives the likes of “Standing Stones” a heavy edge. Everyday Heroes enjoy a healthy love for the chorus too, which is always to be applauded.

It almost doesn’t matter what “The Witches King” is about, it sounds sleazy, simple as that, and there is a kind of effortlessly huge sound that comes naturally. “Soul To Save” is the type of pure hard rock fun that Phil Campbell And The Bastard Sons seem to do with equal ease (doubtless its tough, else everyone would be at it).

“Victorious (Take My Chains)” is the one that goes full on southern rock, and you can blame this on the boom boom if you like, blame it on anything, but if there were festivals in 2020 then this would be ringing out of tents everywhere – and in future years I wouldn’t rule EDH out of the main stages, either.

“All Outta Faith” has some bluesy balls, not a million miles from latter day Orange Goblin, not far from Clutch’s punch, but yet not quite either. Rather it has a soaring harmony that suggests mainstream intent.

Likewise, “The Crow” does a power ballad thing. Partly, I am guessing because hard rock albums always did. It’s more “Ill Be There For You” than “Every Rose (Has It’s Thorn)” but it is expertly done and you can imagine Inglorious having a massive hit on Planet Rock with it.

“Breathe Again” does the thing that I always love and starts with a guitar solo, while “West Of Forever” rather pleasingly opens the colour pallet a little further. The inspiration for the record as a whole was a trip that Williams took to Spain to do the Camino Pilgrimage, and the touch of mariachi style trumpet here is just a hint at more to come. The last one, “Without A Throne”, though is another slower paced one, but the sound of the guitars here, the intent throughout, is right from the top draw.