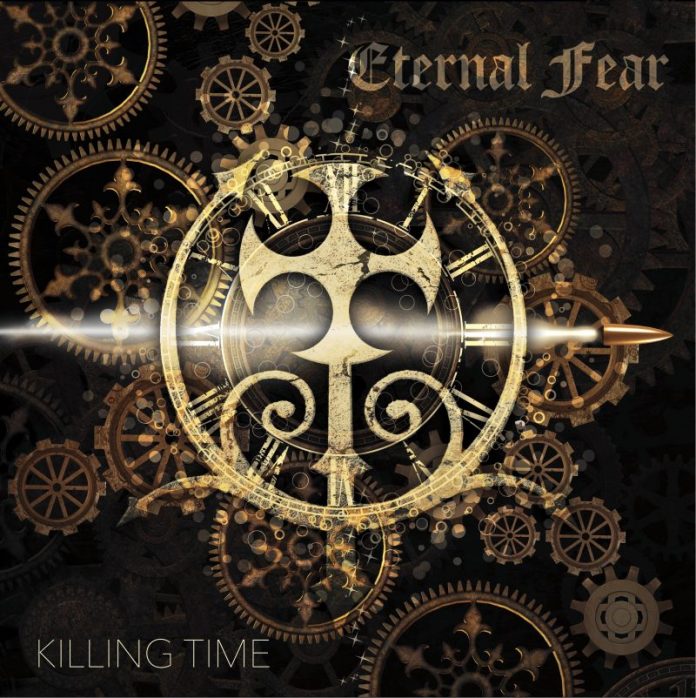 From Sweden, but with their hearts in the UK

Sweden’s Eternal Fear can rightfully, perhaps, claim to be among the best exponents of traditional heavy metal that there is. By traditional metal, we don’t mean some bullshit dungeons and dragons Manowar-esque leather clad nonsense either – these boys are too savvy for that.

Instead EF do something far better and much more fun. They channel Heavy Metal – that is to say the direct line through Black Sabbath, Iron Maiden and all the others, right up to Avenged Sevenfold today, and give it a twist of their own.

There is also a case for saying too that with a little more luck over the last 20 odd years Eternal Fear could have been as big as some of those bands too. Indeed, as clichéd a phrase as this might be, it is nevertheless true, Eternal Fear might just be the best metal band that you don’t know. Whether you choose add a “yet” to that last sentence is optional.

The second of the 11 songs that make up album number five, “Age Of Glory” tells you all you need to know, really. It begins with a riff that could cheerfully move mountains, adds a thunderous portion of drums, a lavish, crushing bass and then chugs into its first line: “we were born, to defend our motherland.” Add in some twin guitar action in the solo that is a mix of Maiden and Thin Lizzy, and you’ve got quite a recipe for horns up fun.

Album opener, “Thy Will Be Done” which starts with an air-raid warning is perhaps even more classic in its galloping intent, while “Black Country” (which is essentially the home of metal after all) is almost thrash like as it seethes with all kinds of rage.)

The five piece have been doing this long enough to be as skilled as any band out there. The guitar work on “The Shadow” is superb, while singer Ove “Evil” Johnsson is one of the more versatile of his type.

All of which means the band don’t just go over the same ground. Clever keyboards at the start of the title track give a particularly dark hue, which is counterbalanced magnificently by “Halls Of Odin”, a genuinely euphoric power metal tinged track that is a real highlight.

Capable too, of being downright heavy when it flexes its muscles, as it does on “Child Of Darkness” “Killing Time” is an album that also struts down other avenues at a moment’s notice. There is, for example, a Deep Purple feel about “Evil Ways” and “No Guts” benefits from sounding like Dio, but throwing in a sense of foreboding in its backing vocals and, perhaps most strikingly there’s even a touch of Alice In Chains in the verses of “Chamber Of Lies.”

And that’s the thing about Eternal Fear. You know the influences as well as they do, but they are clever enough at using them not to sound like any other band. It’d be nice to think that this was the one that really see’s them make a breakthrough. Whatever, though, “Killing Time” is a mighty – and mighty fine – collection from an original and yet traditional band.