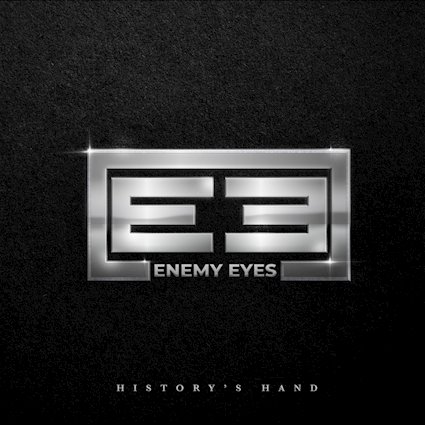 It’s funny, when you love and live music, you often find yourself rowing with the type of people who think Queen are cutting edge.

Luckily we never got to singers, because I doubt me saying the best was “Johnny Gioeli” would have gone down well: “You’re just trying to look cool,” they’d have said. Yeah, cos that’s me all over.

The fact is, though, since Hardline in the early 90s – the band he formed with his brother and briefly included Neal Schon – Gioeli’s presence on any record gives it an air of class.

Enemy Eyes is his vision for a “European, modern metal” record. Which makes a lot of sense. A New Yorker, the current version of Hardline is made up of some of the top session musicians in Italy (he’s signed to Italian label Frontiers Records and their in-house producer Alessandro Del Vecchio is on bass and keys here) – and throughout his career Gioelli has shown a desire to stretch himself.

As such, and up to a point, Enemy Eyes is a natural progression, but so different is it to what you’d imagine, you can only commend everyone involved for having the skill to pull it off.

In fact, I’d go so far as to say if you don’t like “Here We Are”  – the opener – you might as well skip to something else, because the modern crunch, the quasi Power Metal grandiosity, its all here, but so is the trademark vocals, the gift for a melody and a stunning solo from Marcos Rodrigues.

Del Vecchio’s keys underpin the title track and he does a stunning job. There’s a sort of Dream Theater quality to this one that is inescapable, but where – occasionally DT – can sound a little cold and clinical, then almost to banish those thoughts comes “Peace And Glory”. Hair is being let down, fun is being had and somewhere Russell Allen and Symphony X are wishing they’d got here first.

There’s talk of this band playing live too, and when they do, you’d imagine “The Chase” is going to be integral to the set. A wonderful rock song, but if fists aren’t up in the air in its intro then I’d be amazed. A feature of the record, too, is just how it takes it’s time to build. “Preying On Your Weakness” for example broods like a modern Maiden prog rocker, before exploding into something different. That one feels like the centrepiece, side 2 (if you will) begins with the classical flavours of “What You Say”. One of the more immediate ones here, it is probably exactly what was envisioned when this was planned.

One thing we haven’t discussed so far is the lyrics that pepper this. A sort of state of the world address, there’s not a lot of light here. “Maybe your hope is broken now” goes the hook on the ballad “What I Believe”, but throughout, this is impressive for the fact it doesn’t sugar coat anything.

One thing stands out though. And it’s in these words, speaking of the record Gioelli said that his love of music had been like a journey, “to more modern bands like Breaking Benjamin, Volbeat, Architects, and on and on.” That chimes. That’s how it should be, there’s always something new. Indeed “The Dream Has Gone” and the likes don’t get made without that drive, the synth of “The Miracle In You” underlines the point yet again.

Above all though, this is just a damn fine rock record. You could stick “Broken” on any album of this type in 2022 and it would improve things. Three Days Grace fans need to get here immediately. As “Rat Race” dots the I’s and crosses the T’s on the album, doing so in the same confident, classy way the rest of them have behaved, you are left to think about why some have genuine megastardom thrust upon them, while some remain cult acts.

That’s a question I can’t answer, what I can say though, is simply this: Enemy Eyes is a supremely good, modern take on classic rock. Made by grown ups, for grown up’s. And Gioelli is still the best.