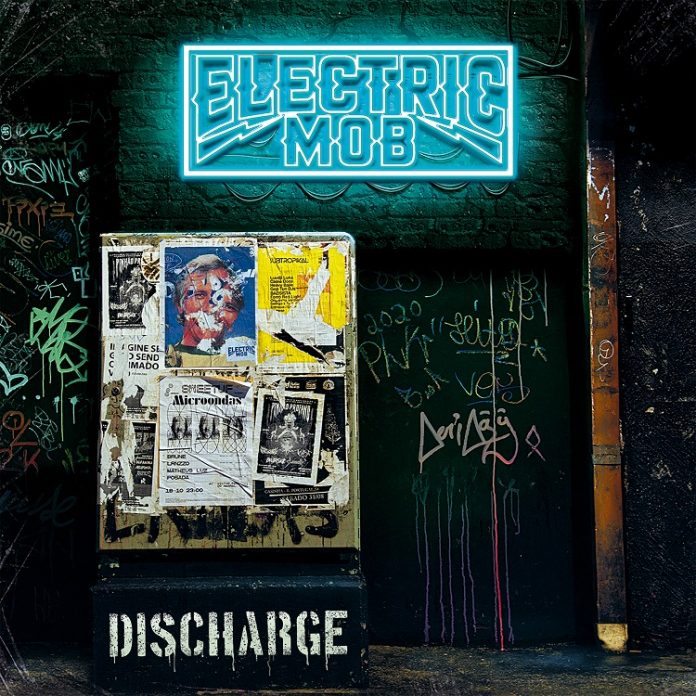 There’s only one place to start with Electric Mob. Their singer Renan Zonta. Good god, the lad can sing. I know people who don’t like Nathan James of Inglorious (never really understood why) but even they agree that the fella has a set of tonsils on him.

Well, there’s a bit on “Devil You Know” the second track on the debut record from Electric Mob, where Zonta (who like James has been on “The Voice” soars – and you think to yourself:  we are witnessing the birth of a new star here.

From the start of “Awaken” – a sort of sleazy bluesy intro – you’ll have them pegged, and this isn’t some big reveal where I go “but you’d be wrong”, either. You’ll have them pegged, as big, brash, bluesy arena rockers with tremendous skill. Goodness me, look at the solo that Ben Hur Auwarter casually pops out right before Zonta unleashes that aforementioned roar, the hooks, the choruses, everything about them, screams bold and unashamed.

And they are good too. Occasionally, very good actually.

Because things like “research” and “reading supporting material” aren’t exactly strong points of mine, to be truthful, I didn’t even notice that Electric Mob are from Brazil, but they are clearly looking a little further North and East for their inspiration. US bands – and there is a touch of Audioslave about them in scope – but English ones too, and “Kings Ale” even sounds European in language for example, and the way the vocals for “Got Me Running” are unleashed is pure Led Zep.

There is a definite suggestion that here, Electric Mob are four young kids fulfilling their dreams, playing the sort of music they love. You can imagine Whitesnake doing “Far Off” (well, you could, if Coverdale could hit them notes anymore…..) and you can almost hear the fun they are having.

The acoustic touches are done with panache too. Anytime there’s a song with whistling in I think of “Patience” by GnR, but on “Your Ghost” it actually seems to exemplify a foreboding, it builds, but it still seems to brood a bit sulkily in the shadows.

“Gypsy Touch” shines a light on their sleazy side – and this is possibly the most modern thing that the album has to offer, certainly the sleaziest – and the bass work of Yuri Elero makes “123 Down” funkier than many of the others.

For my money, though, they are better when they trim away the fat and get their heads down. “Upside Down” is a proper LA rocker (think Warrant in the “Ultraphobic” era) and the slide guitar of “Higher Than Your Heels” has a bit of the Electric Boys about it. Always a good thing, obviously, but the horns are a proper fun touch.

If the whole of the record can broadly be summed up in three words: “superior hard rock”, then that’s the same for the harmony drenched “Brand New Rope”, while the last one “We Are Wrong” carries on in the same vein. But in its light and shade, its piano ending, and its craft, it offers a glimpse.

A glimpse which means that Electric Mob have the raw materials to make a classic record at some point. “Discharge” is not that, nor is it the most original record that you’ll ever hear. What it is though, is a statement. One that says: “keep an eye on us.”