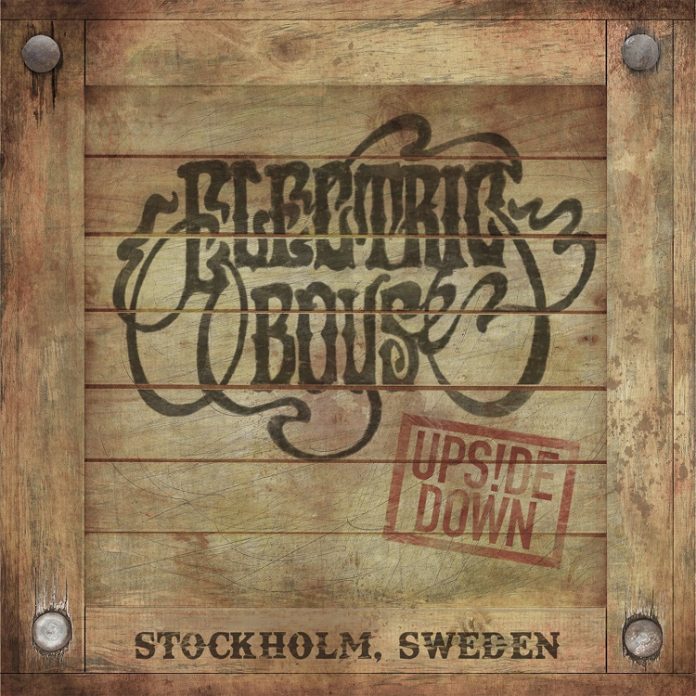 Whether he knows it or not – and I am guessing he does – at one point in the “Upside Down” record, Conny Bloom nails the last 32 years of the Electric Boys.

For one thing, there’s a track on here called “Twang ‘Em And Kerrang ‘Em” (which basically is what he’s done all this time) but it’s not even that.

Rather, in said song he sings this: “here I come cruisn’ looking for some sin, to the sound of Eddie Cochrane sniffin’ gasoline”.

And honestly, that’s about all he’s done since he put out “Funk O Metal Carpet Ride” in 1989.

Rewind back to that time and it was a very different place. Somewhere in the West Midlands, there was a 15 year old schoolboy always looking for the next thing. I took one listen to “All Lips N Hips” and I’d found it.  In many ways it became the foundation for what I love now. The crunch, the melody, the groove (not for nothing was one of their records called “And Them Boys Done Swang”,

But there’s a thing about Conny Bloom and the boys – drummer Niclas Sigevall is still in the band, but lives in LA and the pandemic meant he couldn’t appear – while most of the bands I loved back then are either a shadow of themselves, don’t exist anymore, or just tour (Bon Jovi, Poison, Almighty, Guns N Roses, take your pick which is which), Electric Boys are not only making music that’s as good as ever, but more to the point, still pushing the envelope.

So it is the reason, surely,  that “Upside Down” begins with the “Upside Down Theme” – a seven minute instrumental that shows off Bloom and “Slim” Martin Thomander’s incredible skills.

However, the way they follow this up is surely deliberate. “Super God” is so quintessentially the band that its almost as though its here to underline that they are back, and right at the top of their game.  And make no mistake, here, on this record, they really are.

“Tumblin’ Dominoes” adds an acoustic undercurrent to its mid-paced rocker, and you could – if you closed your eyes  – imagine this being a Hellacopters tune from the latter period, but it’s the fact, really, that this sounds so fresh that is truly incredible.

“Never Again Your Slave” has a dirty groove, before the spoken word bit. All topped off by a chorus that’s arguably the heaviest hook they’ve ever had.  “She Never Turns Round” has a touch of Zeppelin about it (and I’ll assume here they know this) but “Globestrutter” is magnificent. A shining, stomping, glam thumper. Literally a celebration of touring, the joy of being on the stage “I am going where I belong” sings Bloom, and you know he means it. Every single word. And a performer like him will feel the Covid-19 hiatus perhaps keener than most.

“The Dudes And The Dancers” is a real curio. A tale of playing in LA at the height of the 90s hedonism “where are they now? he muses. The unspoken answer is, of course, in the case of the Electric Boys, they are right here.

When I heard “…Carpet Ride” all those years ago I tried to find more bands that sounded like this, and whilst there was none – not really – I did stumble across Enuff Z Nuff and “It’s Not The End” fittingly melds some rock n roll with 60s psychedelics, a little like Chip and the chaps still do.

The last one, “Interstellarfella” neatly underlines, though, that this is unique. A band that has its sound, but still likes to surprise. They do this throughout “Upside Down” and its not just a great album, but a great Electric Boys album. One of their best – and that’s high praise indeed.