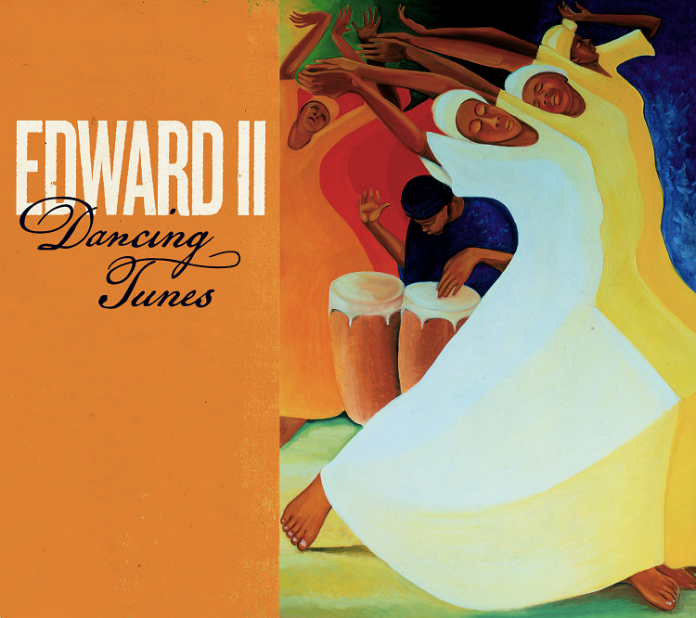 Back in the early to mid-eighties I used to attend a folk club in Kings Heath, in the leafy suburbs of Birmingham. This place was called the Red Lion Folk Club and was in an upstairs room of said pub, The Red Lion. The policy was to arrive early and queue up if you wanted to get in. The reason for an early attendance was that it attracted such renowned artists as Roy Harper, The Strawbs, John Martyn, Loudon Wainwright III, Alias Ron Kavana along with local artists such as Eddy Morton. I was a regular for a number of years but one group that did stand out for me was a band called Edward ll, who played a fusion of world music, English folk, and reggae. It was a wonderful night from an outfit I’d never heard of and I still remember them to this day. Since then, they have been known as Ell, Edward the Second, The Red Hot Polkas and e2K. They broke up after losing several key members in 1999 and have come together off and on since then. They have a new album called `Dancing Tunes` a selection of traditional songs from Jamaica and the Caribbean as collected by Walter Jekyll and recorded by Louise Bennet. The band have imparted their own unique take on the songs, re-interpreting, blending, and referencing some of the English tunes which no doubt added to the original mix.
The album kicks off with `Dry Weather Houses` a rail against having to pay rent to a landlord for a house where the roof leaks when it rains. It has just the right hint of reggae and remined me of the sort of stuff Chaka Demus and Pliers did with a duel vocal role. We have a wonderful version of `Long Time Gal` a song delivered in a Jamaican patois. A number that just makes you long for sunny days with a long cool drink in your hand and a track thats really hard to sit still to.

`Hold Em Joe` is a number that both Ziggy Marley and originator Harry Belafonte have covered. This I have to say is the one I like most of the versions I’ve heard. A sort of whimsical song that is given the full reggae treatment here and has some female backing vocals that are a joy to behold. At times it has a hint of `Get Up Stand Up`. Who doesn`t know the `Banana Boat Song` a calypso work song written about night shift Jamaican dock workers loading bananas onto ships and made famous by Harry Belafonte. This version has a much fuller sound and some delightful backing harmonies.

`Linstead Market` is a song that tells of a mother who goes to the market with her ackee fruit but does not sell any, with the result that her children will go hungry. I thought it had a ska tinge but on further investigation I find it`s a Mento type folk song, a style that predates and has greatly influenced ska and reggae. Another tune that Harry Belafonte has recorded comes with `Cordelia Brown`. This one is a very danceable calypso version that has some captivating brass tinges. A track that relates to a lady who is possibly spurned by a lover and her head turns red. Once the opening lines were sung in `Yellow Bird` I was brought back to my childhood where this song is so familiar to me. A quick search wasn`t much of a help but brought up an interesting version by American singer Chris Isaak. This one though has a laid back chilled out reggae vibe with some charming melodeon. Apparently Shake The Papaya Down` is a Jamaican children`s song. This version has a really gentle almost jazzy texture to it with some harmonious backing vocals and some sweet brass tinges throughout.

Another classic that i`m sure we all know is `Island In The Sun` a song written by Harry Belafonte and Irving Burgie (Lord Burgess) and sung by Belafonte in the said 1957 film. This is a much more upbeat version but still retains the same reminiscence and reflective quality of the original. There`s a wonderfully expansive feel to `River To The Bank` an instrumental track which all of the members of the group seem to get their turn to shine.

`Banana Song Tallyman Dub` is more of an extended version of the Banana Boat Song.

But `Hold Em Joe Nucleus Roots Dub` which I have to say is marvellous, has all the sort of elements of dub that you`d expect plus a sort of quintessential English folk mash up. The final piece `Yellow Bird Nucleus Roots Dub` has the melodeon leading us with a chugging guitar riff through this instrumental delight with echo and reverb allowing you the time to sway along.

I have to say `Dancing Tunes` is an utter thrill to behold. There are songs here that will spark that familiarity once heard and will have you tapping your foot and moving around when listening to them. There was certainly something for everybody here. This is an album that demands to be listened to and especially in a live setting where I can guarantee this band will deliver and you`ll have the space to really allow yourself to be overtaken and let go. As these difficult times seem to be coming to an end, this is certainly something worth looking forward to.