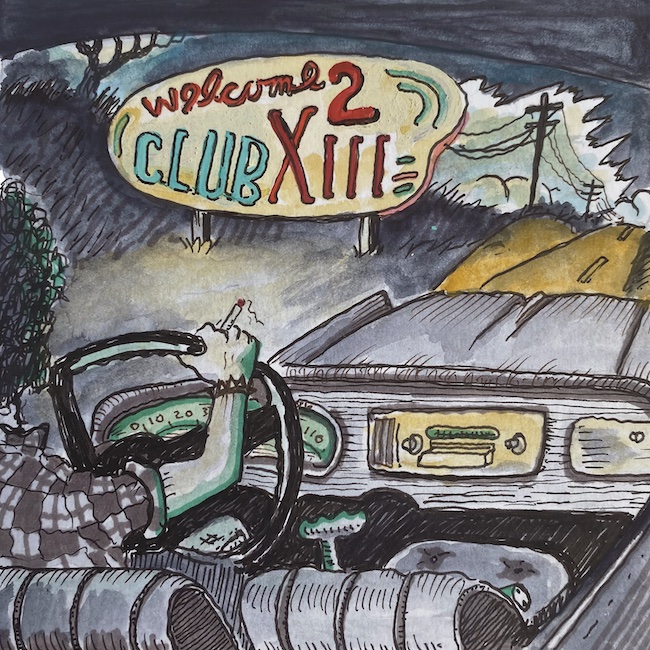 Drive-By Truckers have released 13 albums prior to this one. This is their 26th year, and I reckon I’ve been a fan for about 20 of them.

It was The Dirty South album, I was listening to the radio one night, and the played the track “Putting People On The Moon”.  I went online and bought the album before it had finished.

To carry this on for a little bit, I don’t often listen to music that I am not reviewing these days. I don’t have time, such is the amount of reviews I do, but when I do, you can bet your life that there’ll be a Thin Lizzy track or two, a Hold Steady tune, a Black Crowes one maybe, and there’s always, without fail something by DBT.

The point I am (long-windedly) making here, is that I love Patterson Hood, Mike Cooley and all the rest of these characters that have been in and out of the band over the years and, my goodness they’ve got a back catalogue that you can lose yourself in.

Which brings me to album 14.

I’ve had a review copy of “Welcome 2 Club XIII” for weeks, and I must’ve listened to it 15 times. There comes a time when you have to, well, shit or get off the pot. So I am here to tell you: I still can’t make my mind up.

As the press stuff puts it rather neatly this one is a “departure”. There’s not much commentary on current affairs here (as there has been on the last couple) but it’s a little bit more than that. “Welcome……” is almost deliberately oblique, it seems. There’s nothing of the immediacy of “Shit Shots Count”, say. Instead, the album kicks off with the spoken word (mostly) “The Driver”. Give this one a listen or two and this is, maybe, the one that shows this record off best. The closing guitar solo, the backing vocals, the incredible way they use the car as, well, a vehicle for everything else. This is a Truckers classic.

I am always a fan of the “Cooley” songs on DBT albums. “Birthday Boy” for example always goes on when its mine, and he is finding his own way on “Maria’s Awful Disclosure”, as he always does.

To be truthful, some of the others take a little longer to fully reveal themselves. “Shake And Pine” shuffles in the shadows, “We Will Never Wake You Up In The Morning” is another. I’ve listened to this many times and its elicited different responses each time as it discusses the torment of the characters life. “Simple evolution,” it concludes “isn’t working as a solution”.

The title cut is an odd one. Something of a rock n roller. “All the usual suspects are acting weird” sings Hood, and maybe that’s a metaphor for this collection.

“Forged In Hell And Heaven” features Margo Price and is Americana from left field, while “Every Single Storied Flameout” is perhaps the most immediately enjoyable. Cooley, again, using words and melody in his own unique manner, power chords abound, and poetry like: “the heart hears what it wants to”. Add into the mix a proper horn section and away we go, frankly.

“Billy Ringo In The Dark” could come off a latter day Billy Bragg record. Fragile, and with a sense of longing, even hopelessness, it’s a compelling piece. This is a compelling collection, too. One that ends, really, the way it began. With reflection. If the opener is all about that, then so is “Wilder Days”.

Maybe they aren’t those kids anymore, the ones who are “young and full of big beliefs that life could not sustain”, but they probably haven’t changed much either. Ruminating on these concepts seems to be at the heart of “Welcome 2 Club XIII” – and actually, as if to prove my point at the start of this, I like the record more now than when I began writing this review. Look, like Bob Dylan, say, you’ll probably only know how good this is in a year or so. For now, though, it’s a solid record. Compelling and with some brilliant moments. Come and talk to me about it in 12 months and my opinion might be totally different.