A SCATTERING OF MUSIC 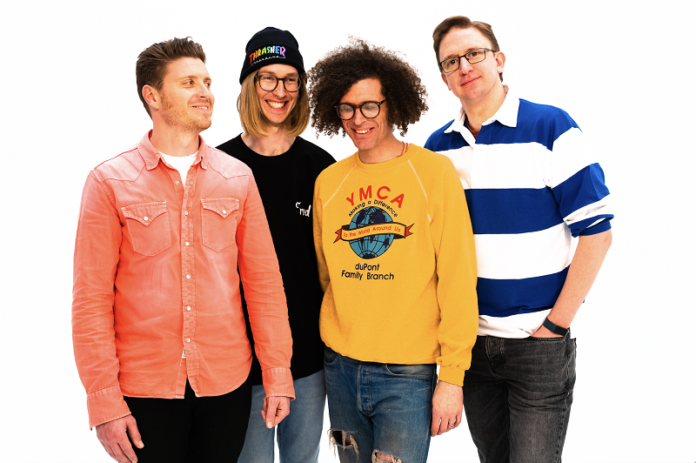 Hot on the heels of their critically acclaimed comeback single ‘Crypto Klepto’, ASYLUMS return with another slice of anarchic agitpop called ‘Scatterbrain’ along with the announcement of their eagerly awaited fourth album ‘Signs Of Life’, due 14th October.

Album opener and new single ‘Scatterbrain‘ comes out of the starting blocks like Dr Feelgood and The Jesus & Mary Chain gene-spliced with Richard III era Supergrass, urgent, pseudo sardonic but somehow still fun, it sets the tone for the whole album which was always intended to be life-affirming and joyous after a deeply reflective period.

Recorded at the legendary Rockfield Studios with genre-bending ‘Manic Street Preachers’ producer Dave Eringa in the driving seat, ‘Signs Of Life’ is a record that evolves the Asylums’ sound once again while still staying true to their musical and lyrical DNA.

Asylums ‘Signs Of Life’ draws inspiration from a spectrum of human emotions and examines how they intersected with technology during the accelerated change of the last few years. As well as dialling their manic rock sound up to 10, this record also draws from the likes of R.E.M., The Magnetic Fields and The Beatles who all arguably made some of their best work during a live hiatus.

“When Luke said he wanted to do an album at Rockfield in 8 days – all played live & to integrate big strings into their sound –  it sounded so ridiculous I thought “let’s do this”! Only a band that can really play can do this kind of recording. No clicks, no tricks – all live off the floor, a few judicious overdubs, some amazing string arrangements from musical polymath Henry & a bizarre interruption from Countryfile – it was a pretty intense week and I couldn’t be prouder of them for what they achieved! They’ve really taken themselves to the next level!“

Track Listing for ‘Signs Of Life’: