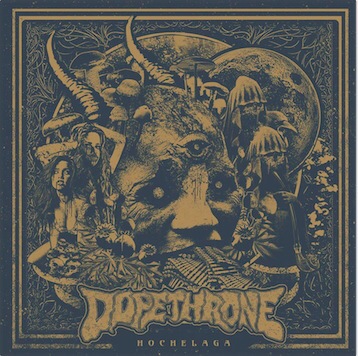 Filthy sludge from the Montreal sewers

When the first video you release for your new record is called “Scum Fuck Blues” and when your album starts with a spoken word piece that contains the line “in the jungleland of narcotics, it’s fight, claw kill and every man for himself,” you probably aren’t gunning for a slot on kids TV.

More than that, though, those twin facts are almost like a mission statement for Montreal three piece Dopethrone – that assumes of course that the trio have ever been a meeting where such things as mission statements are talked about. You’d guess not, but that’s not the point.

The point is, that the sludgey sounds contained within the seven tracks that make up “Hochelaga” are so rancid, so putrid and so downright disgusting that it’s a wonderfully unsettling record.

Beginning with “Sludgekicker” it is monstrous grooves and bigger riffs all the way as guitars are downtuned to an insane level, “Sludgekicker, slave to the liquor,” growls Boorman over the top. And, if you like that song, then this is the record for you, as the other six here inhabit much the same grimy habitat.

“Chameleon Witch” features some marvellous lead playing, “Vagabong” encourages you to “blast off for kicksville” before setting about you with a concrete block until you have to submit to it’s charms. “…..Blues”  – chorus “Smoke.Drink.Die” – opens with a preacher telling you that people want to pray on young girls and entice them into “Honky Tonks” by the end of the song you are left hoping that’s all that happens to them…..

“Dry Hitter” is in many ways, you suspect, the national anthem of Dopethrone. Almost chanted lyrics explain that “I drink fire, smoke dope.” It’s not subtle, but it’s mighty effective.

Speaking of which, “Hochelaga” (which takes it’s name from the archipelago of Islands that houses Montreal and it’s surrounding areas) ends with a song which crystallises rather explicitly all that’s gone before. “Riff Dealer” takes all the thoughts and ideas on the record and neatly concludes them over a pounding bass driven riff that is so dirty and heavy that almost like being hit in the face by a baseball bat covered in shit.

“Hochelaga” is a quite brilliant exercise in sludge filled doom. It’s disgusting yes, but it’s meant to be. You wouldn’t want Dopethrone to move in next door, but inhabiting their infested world for a while is great fun.