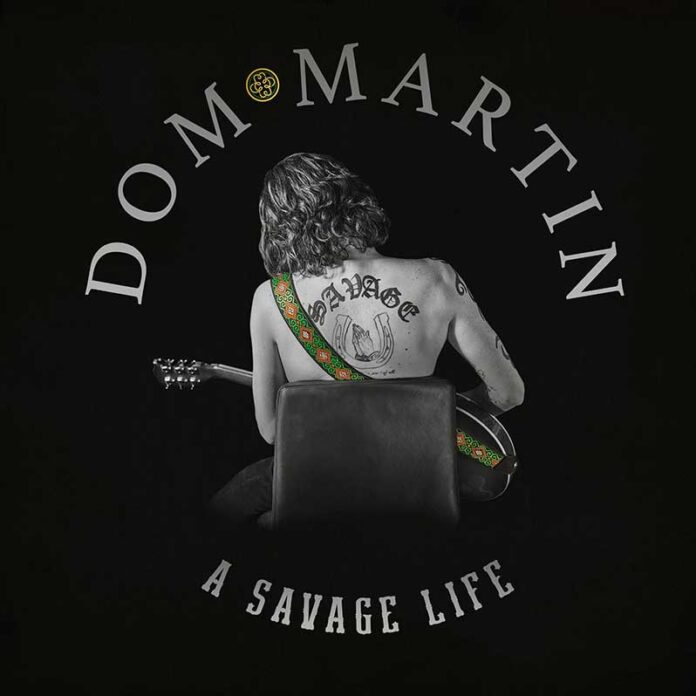 Dom Martin has been nominated for a truck load of awards at this year’s British Blues thing (this album has been out for three weeks or so, so it might already have happened) to be honest with you all, that sort of thing doesn’t – to paraphrase Shania Twain, impress me a great deal – after all The S*n is the most read Newspaper in the UK and The Mercury Music Prize normally goes to something no one has ever heard of just to prove how cutting edge they are (now you might see why this website doesn’t mess about doing End Of Year lists…..)

Here, though is something that does intrigue. Martin’s own words when discussing “A Savage Life”:  “[it is] another part of my life story and is also, in a small part, in memory of a great friend who passed away in 2021. It’s my blues, it’s real and I have to live with it!”

And that, to me, is “the blues” the emotion, the reality, the idea of someone who lives, loves and is immersed in the music pouring their heart into every single note.

In short, when they do exactly what Dom Martin does here.

“A Savage Life” is a genuinely sensational piece of work. The way it veers from one thing to another is astonishing. “Unsatisfied”, seemingly to underline that you can never be completely happy when you’re a certain disposition, crunches, comes in with a real longing and Martin’s voice has a primal quality, but don’t for one minute think that’s the album sorted.

Not at all. Given that the sense of longing in the gentler “Here Comes The River” is palpable, not to mention the opening line “I don’t know where I am going…..”sees confusion writ large. That one is just Martin and his guitar, and my! He is a wonderful player.

“Blues On The Bay” has a touch of Robin Trower about it, a real soulful, mellifluous touch to the music, while the acoustic “Man From Nowhere” invokes some kind of back porch spirit, and is – says the man himself – his story, that he’s just appeared and no one knows about him.

That he follows it up with “12 Gauge” is entirely in keeping with this album. Timeless, slide drenched, bluesy rock n roll.  It is the work of an artist that could basically have emerged at any point in the last fifty years and still been of his time.

“Echoes” – the recent single – is a wonderful slice of something that seems hewn from the rocks. Widescreen, folk tinges, a cracked, broken delivery, a world away from the young man in his photos, that’s for sure. It is written for his late parents and, might well be the best thing here.

It is amongst many gems, mind you. Not least of which is “Drink In Blue Corners”. Dark and with a jazz flavour or two, it’s another left turn on an album full of them. The rawest this gets though – certainly lyrically – is “Addict”. The sort of thing you can only assume is rooted in truth, but then you also don’t want to pry. “She’s off her face…..she hates this place”, he says – you can’t really call it singing – rather bleakly.

“Maxwell Shuffle” is the one for his friend, “Flash” Gordon Maxwell, who died last year, and the jam style is wonderfully done. As is the last one “The Parting Glass” – a brand new take on a Traditional Scottish folk tune, and which Martin owns here.

So, a Northern Irish blues man, who takes acoustic turns and writes songs from the heart? It’s kind of inviting lazy comparison, isn’t it? Even Martin himself does it, saying: “I think Rory Gallagher would have liked his one” about “…Shuffle”. The truth is he probably would, and no doubt he would have admired the talent in a kindred spirit.

“A Savage Life”, though, is the sort of thing that suggests that Dom Martin is both his own man, and moreover is too good to be “the new” anyone. He stands on his own, and he deserves to.