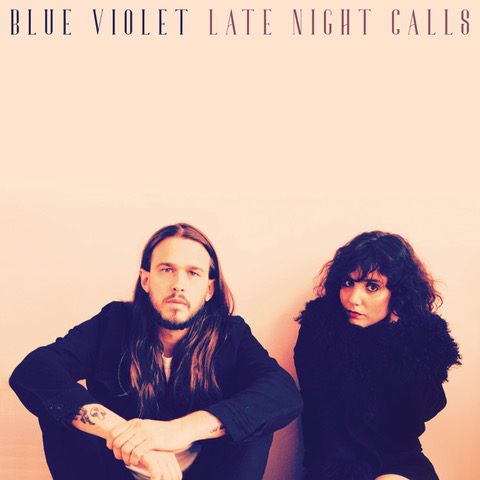 Blue Violet are husband and wife duo Sam and Sarah Gotley. They previously performed under the guise of Broken Bones Matilda before regrouping to form Blue Violet. Their debut album ‘Late Night Tales’ is a record that blends experimental sounds with intimate and intricate songcraft. It touches on themes including beauty and heartbreak, love, and salvation. It was produced by Rob Ellis (PJ Harvey / Marianne Faithful) and also features contributions from Portishead’s Jim Barr and Rod Brakes.

We are gently introduced to the album with the delicate `White Beaches` a quite subtle environmental call to arms with Sarah`s  breathy vocals set against some jangly guitar riff s that for me really brought to mind the best of Julianne Reagan and her band All About Eve. A stunner of a track to lead us in on. We have in `Undercover` a quite laid back dreamy number with a piano kind of underpinning it. Sam heads up the vocal but is joined by Sarah and between them they share a track that would give Fleetwood Mac at their height a run for their money. We have a brief guitar solo midway through which adds to the overall retro rock texture.

There`s a real intensity to Rabbit Hole` and I thought is this a David Grey number but no it just has that potency that he sometimes achieves. It`s a sort of stripped back composition with mainly piano. synth, a steady drum beat and Sarah`s haunting vocal delivery. We gain some vocal harmonies and a string arrangement in the latter part. It`s a ballad like submission that tactfully grapples with addiction, self-destructive cycles and the powerlessness that comes with watching a loved one go through a hard time.  A subject that has rightly come to the fore these days is mental health issues and it`s talked with the dreamy `Asylum`. The vocals switch between the duo and the number has an almost repetitive mantra towards the end.

`Suffer` is a song about being in a relationship that is fuelled by control and chaos. It focuses on the difficulties of being with someone who no matter what you do always ends up hurting you. It`s impact is heightened by it`s stripped back nature of just guitar and vocal. The addition of a Cello midway through adds further poignancy. A track about fighting back is shared with `Poster Girl`. The character it centres around resists objectification, defends herself from evil and keeps whatever company she sees fit. It builds musically as it evolves with shimmering guitar chords, synth keys and intensely shared drums all layered atop and around each other to create a delightful wall of sound for Sarah`s evocative vocals.

`Hard Rain` has a kind of edgy vibe with Sam leading us in vocally before Sarah adds her harmonies before taking over the vocal lead. There`s a constant reverberating guitar riff throughout and some subtle drum rolls. We have another introspective reflective piece with `Mama` which is gently shared with guitar, a steady drum beat and Sarah`s emotive vocal delivery aided towards the end with some complementary harmonies.

`Halo` conjures up words like dreamlike, mesmeric, and hypnotic and I found myself happily drifting off as a string arrangement joined. This is the kind of number that will have a venue illuminated with phones and cigarette lighters held aloft by waving arms. This release closes out on `Vanished In The Night` which begins quite ethereal with a strummed guitar and vocal before a piano joins and the volume lifts. In the last minute and a half, we have handclaps and a variety of percussive elements as Sarah almost fights to be heard as the number reaches a blistering climax.

There was so very much to enjoy with `Late Night Calls` and it would be almost lazy to churn out comparisons to other bands as this duo have got such an emotive and compelling sound.

I felt that it`s the kind of album to just sit back and wallow in it`s warm glow that will wash over and around you and leave you with that contented feel good sentiment and ardour.