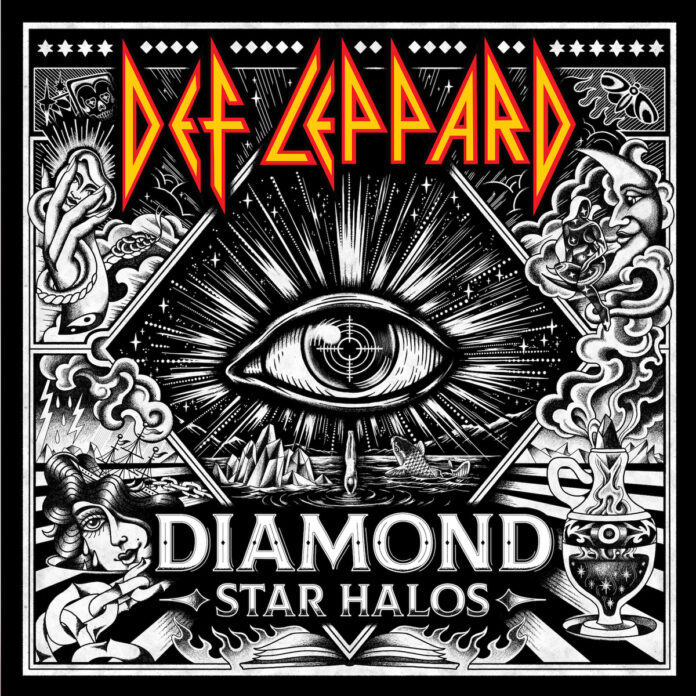 Def Leppard can be kind of lumped in with Kiss and Van Halen when it comes to my musical tastes. That is to say, I should like them a lot more than I actually do. Even as a hard rock obsessed kid in the 80s I can’t claim to love them or know their back catalogue forensically, For clarity, I like some of their albums particularly “Pyromania” and “Slang” a lot, never been mad on “Hysteria”. I’ve seen them live a few times, they’ve been ok. The last twice I saw them, I confess, it was for the supports.

Regular readers will know that MV doesn’t review records for the sake of it and I’d never review a record that I didn’t like. So, here’s something I didn’t think I’d be writing: “Diamond Star Halos” is absolutely superb

I’d heard the glam rock single “Kick” a few weeks ago, when it was put on these pages, and honestly, unless you had a sense of humour bypass, there’s nothing not to love in it. Ok, I thought, yeah but Leps always been a “singles” band in my opinion. Not here, not a chance, they sustain it for more or less all of “….Halos” 15 songs.

“Take What You Want” the opener, begins like Mott The Hoople playing arenas, and that’s just perfect because that proves the band are doing what they love, and when they kick in with the groove, its got the classic early feel, not the mid period stuff with no life. Then the solo hits. Good lord, Campbell and Collen let fly. Right, I am all in, lets go.

“Fire It Up” is all fists in the air and a heartbeat away from explaining “love is like a bomb, baby come and get it on”, but for all that, it sounds like it was born to rock.

And you can get ready for shocks, too. “This Guitar” – with simply glorious harmonies from Alison Krauss – is as country as they’ll ever get and is a love song like no other. “Love And Hate Collide” this is not. Even “SOS Emergency” pulls off a very neat trick. It manages to sound – pretty much – like a song called that by this band was always going to, and still sound fresh, “Liquid Dust” does its balladry through gritted teeth. “U Rok Mi” (forget the terrible title) is actually pretty funky acoustic led fun, and “Goodbye For Good This Time” is lifted from the humdrum by two things: first it sounds like an Elton John song and second, they’ve got Bowie’s pianist, Mike Garson in to play on it (which must have been special for the band).

“All We Need” has a touch of early U2 about it, and “Open Your Eyes” is a vehicle for Rick Savage’s bass to shine, which it does. Now, I’ll be honest, when I read the titles I assumed “Gimmie A Kiss” was going to be a ballad – and a crap one at that – its neither. It’s actually one of the most fun and catchy tunes here. Look, the lyrics aren’t going to win prizes, but you will be singing it. I promise.

Those words could apply to any of these. “Angels (Can’t Help You Now)” needs a couple of listens to reveal itself. A bit more bleak than you might expect, and a contrast to the more immediate stuff elsewhere, it lurks rather than punches outright.

Krauss is back for “Lifeless” and its pop overtones, “Unbreakable” does classic Leps one last time (and in honesty is the track that might have been cut here) while “From Here To Eternity” feels like the credits are rolling, it is big, it is bombastic. It’s a Bond theme in all but name and it ends the record in rather left field fashion

Indeed, “Diamond Star Halos” seems to have arrived slightly from the outer reaches. Their first for seven years (I don’t think I even heard the last one) it doesn’t feel like they’ve released it because they had to, but rather because they were brimming with ideas as they sat at home (it was made in three countries, Joe Elliott in Ireland, Savage in England and the others in the US) and they just had to get them done.

Whatever, its difficult to imagine that Def Leppard could have, at this stage of their careers, made a better album than this one. Moreover “Diamond Star Halos” is a good deal better than many they made that are lauded as classics.