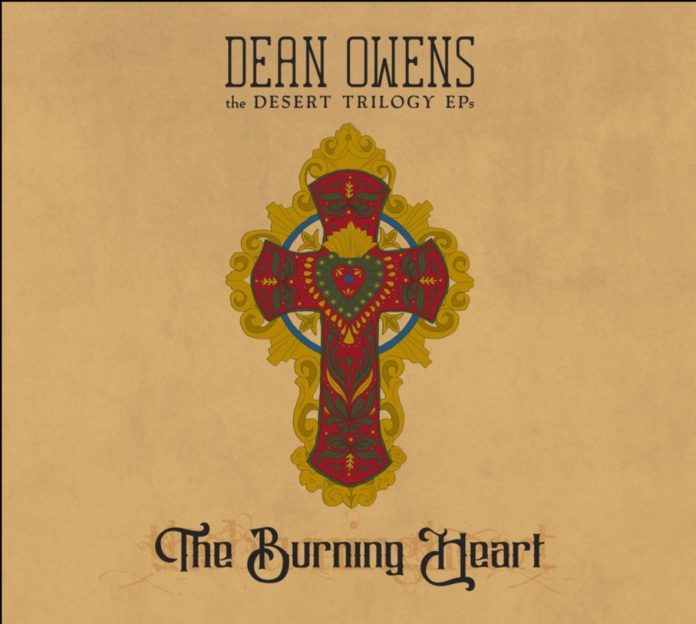 Last year’s career – so far – retrospective “Man From Leith” was special. Brilliantly evocative, it had me reminiscing about family, life and all kinds of things in the review, as I tried to elucidate as best I could just how good a songwriter Dean Owens was.

This project is different.

This is the first one of his EP’s in the run up to his “Sinner’s Shrine” album, but in typically ambitious style, it is being preceded by a triumvirate of releases.

The key point about both “The Burning Heart” as a singular and the album as a collective, is that they are both recorded with Calexico, both before and during the pandemic and anything with the Calexico stamp on it is going to move things away from the norm.

So it is that the man from Leith, becomes the man from the Rio Grande, as it were, as there’s a sweeping southern feel about the four tracks on offer.

The lead song “New Mexico” was on Owens’ debut record (celebrating its 20th anniversary this year). Interestingly, I’d said on the review last year that it was as “dry and dusty as the desert”, but it sounds widescreen here. The full panoramic view.

John Convertino does his thing with his drumming and those wonderful horns. I’d seen the Calexico/Iron And Wine shows pre pandemic and if ever there was a band suited to these types of collaborations, its this one.

“Widescreen” was a word well chosen, too. Given that the whole thing sounds cinematic and grand. “Here Comes Paul Newman” has a flavour of the spaghetti western and is fun, but the wonderful scope of “Riverline”  is a real joy.

“Tombstone Rose” is more like what you’d imagine from Owens. Fragile, beautiful and poetic, it is one from the very top draw, and given the sheer size of what has gone before, then the line “someday we will be replaced” perhaps has greater resonance as it deals with our insignificance.

The next instalment is out in May, which basically means you have two months to savour this, from the man who is very possibly Britain’s finest singer songwriter right now.