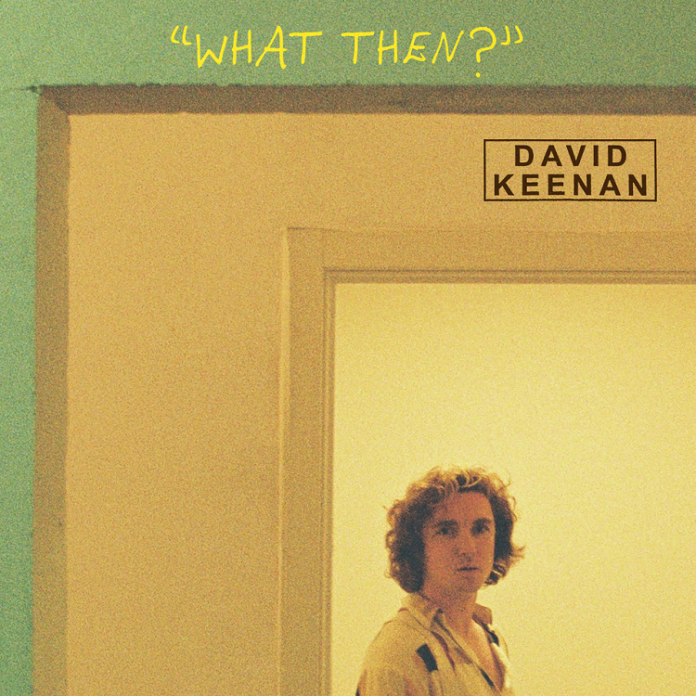 David Keenan is a singer songwriter from Dundalk in the Irish Republic, who has quite an interesting backstory. He found an old Hofner guitar in his uncle’s cupboard, ran away as a teenager to busk on the streets in search of his song writing hero, The La’s lost mystic Lee Mavers. He got discovered when ‘Maxi Taxi’ uploaded a video of David performing `El Paso` in the front seat of his car which gained 40000 views online. He released his debut album `A Beginner`s Guide To Bravery` at the beginning of 2020, moved to Paris as artist in residence and get a book of poetry published. He found himself alone in Paris, but felt he’d lost himself in the wake of his own success questioning his lack of identity, so he started to write and from this came the questioning new album `What Then?`

The album opens with `What Then Cried Joe Soap` and it details the desire for purpose and meaning in our lives and the everyday struggles that we endure which have been heightened during the recent pandemic. A quite captivating and mesmerising listen as the singer relates a poetic monologue of a kind of abstract day in the life of. At times there`s almost an anxiety shared in the vocals across a rolling drum led musical backdrop. We have `Bark` which seems to come from somewhere deep inside the singer. A sort of surreal invective of maybe his subconscious. The whole number, driven with a delightful string arrangement seems to gather a tension as it progresses which blows over as the singer howls and cries out at the conclusion after a brief spoken word oration which had me in mind of Jim Morrison.

`Beggar To Beggar` has an enticing upbeat texture with a strummed guitar and dreamy strings although i`m led to believe it was written at a time of struggle while living in difficult circumstances in Liverpool and was inspired by a W.B Yeats poem. We have a deep slow burn in `Philomena` which if i`m honest I wasn`t too sure what it was about apart from the lady in question, maybe the singer`s grandmother being some person or metaphor for comfort or an easing of anguish within the narrator.

`Peter O`Toole`s Drinking Stories` is a kind of reflective possibly introspective steam of consciousness with a musical accompaniment. A chugging guitar leads us into `Hopeful Dystopia` which seems to enjoy vocalised lyrics that ebb and flow throughout. The title which seems to have words that oppose each other does tend to sum up this offering. An imagined state or society in which there is great suffering or injustice, but not without a glimmer of hope.

`The Grave Of Johnny Filth` has Scottish author, poet and namesake David Keenan relate a brief verse intro before a strummed guitar and piano set a rolling platform for a sung / verbal oration of events that surround or may not surround the life of Johnny Filth who may or not exist, wonderfully curious. We have a quite melancholic submission in `The Boarding House` which may well be a kind of cry for help for human companionship to overcome overwhelming loneliness.

`Me, Myself And Lunacy` begins as a delightfully delicately stripped back composition with acoustic guitar, a tranquil percussive beat, strings, and Kennan`s wonderfully expressive discourse. It gathers piano keys along route and even has the singer whistling towards the conclusion. The lyrics may possibly reflect a recent much more positive state of mind. Although `Sentimental Dole` is quite stripped back with rhythmic strummed guitar chords, a tapped percussive beat, and vocals it`s seems much bigger that the sum of it`s parts. I`m led to believe it`s a call for self-determination and empowerment. Leitrim poet Stephen Murphy adds a section of prose towards the end of the number. A number that drew me back to listen to it a number of times.

This release closes with `Grogan`s Druid` and with a Druid being a member of the learned class among the ancient Celts, this one, I imagine, spends time in Grogan`s bar, supping porter and dispensing advice to anyone who will listen. A gentle number to ease us out on.

Pat Carty of Dublin`s Hot Press Magazine said of Keenan’s music that it “beguiles you in, his lyrics akin to half-remembered barroom wisdom, that, days later, suddenly makes epiphanic sense”.

This may well be the key to `What Then?` It`s an extraordinary lyrically structured presentation but shared against some wonderfully captivating tunes. It goes without saying that it`s the kind of album that you`ll interpret differently each time you deem to listen to it, which should be often.