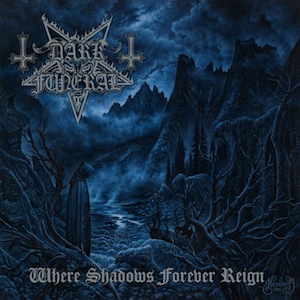 When the opening strains of “Unchain My Soul” announce the arrival of album number six it is evident that new vocalist Heljarmadr has fitted in seamlessly as the opening foreboding riff leads into a powerful and memorable journey into darkness that immediately calms the nerves of the bands fans who may have been sceptical of the new, and in many ways improved, version of Dark Funeral.  At times he vocally resembles Dani Filth and other times it’s Glen Benton!! Either way it perfectly captures the new vision and passion of the band.

Whilst supporters of the band have a lot to thank, former vocalist,  Emperor Magus Caligula for, this album does allow the band to move forward with renewed purpose and energy.  Never is that better exemplified than in the stunning “Nail Them To The Cross” which is as good as anything the band have ever recorded.  Indeed any Black Metal band. Period.

Lord Ahriman is in brilliant form with his creative and punishing riffing throwing the band forward with bravado and gusto that comes from being one of the genre’s leaders.  Not afraid to push the boundaries of a genre that he helped to define.

“To Carve Another Wound” reveals another side of the band that incorporates a groove-like intensity that gives a different dimension from the rest of the album.

The title track “Where Shadows Forever Reign” is the final shot across the bows and it holds nothing back, as if it ever would. There are moments on the album when restraint is the order of the day but this isn’t one of them.  It’s a full frontal black metal assault on the senses that harks back to the band’s early days.

A keyword to describe this album would be “consistent”.  Another would be “brilliant”. Put them together and there is a two-word review that kind of makes all the above slightly redundant.  That said, the band could rightly expect something more than a couple of words with which to extol the virtues of their latest creation.  They are rightly proud of this album, anyone would be.

Dark Funeral have returned heavier, darker and better than ever.

Previous article
Steve Wants To Be Somebody
Next article
Featured Band: Morthus