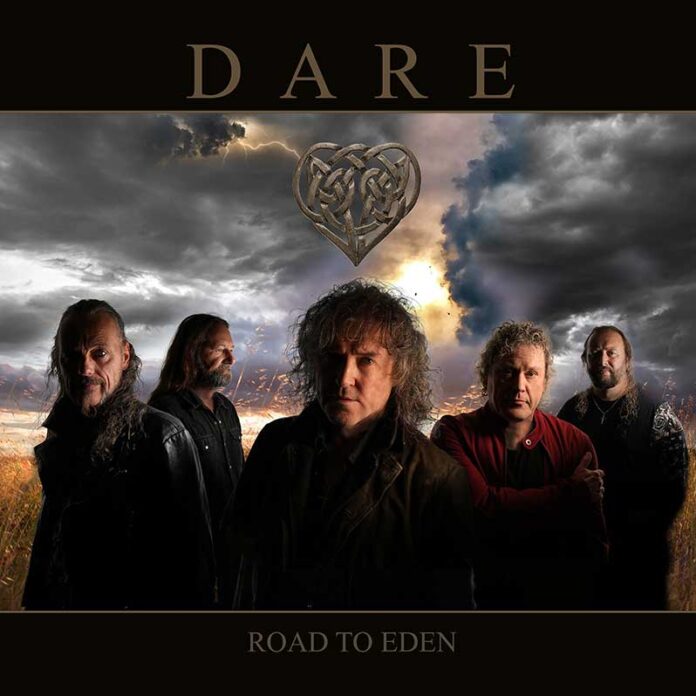 I’d have been about 13 when “Out Of The Silence” came out. That was Dare’s first record, and goodness me, it’s still a classic of the time. To be truthful, we didn’t buy it because Darren Wharton was in Thin Lizzy, we bought it because it got a good review in Kerrang and came out on A&M records. That was all we needed.

Darren and the lads – who once included Brian Cox, wonder what happened to him? – have kept releasing albums over the years and they’ve all been pretty good. This one, “Road To Eden,” is the tenth (if I’ve counted right) and it might well be their best in 30 odd years.

And it’s so good because it’s found the classic sound again, but its also a little heavier. Darker, perhaps. You can almost sense it’s a cracker from the off. “Born In The Storm” takes almost a minute to get going, but its grandiosity is what makes it. The power chords from Vinny Burns give way to a vocal that is very much Steve Overland and FM. Wharton is one of the more underrated singers, and he’s in supreme form here throughout.

That one simply has to be the kick off of the live shows this Autumn, but any of them could make the set and belong there. Wharton spoke in interviews about his desire to translate these songs to the live arena and with “Cradle To The Grave” and its U2 stylings he has really delivered.

A lot of this – perhaps because of what we’ve all lived through – seems to be reflecting. “Fire Never Fades” looks back on childhood, and the title track seems to underline the journey through life, but its sheer scope and size is impressive. Indeed, the whole record sounds sonically wonderful. It was recorded in Wharton’s studio in Wales, he did a brilliant job.

The best thing about the album is that it is entirely comfortable not to be Avant Garde and instead concentrate on the sound that the band has always had. “Lovers And Friends” is a stripped down ballad, for this collection, but it’s layers of keyboard are really special. The best one altogether might well be “Only The Good Die Young”. A kind of revamped “Blood On Blood” by Bon Jovi, but its difficult to shake the thoughts of Phil Lynott here.

“Grace” is one for the dreamers. The one for the ones who got away and might have stayed if things had been different, a vibe that “I Always Will” carries on in truth. There’s a suggestion that all of these are about the past, but this mid-paced rocker will probably transport anyone to whatever moment they choose.

Something else about the album is that most of them are between 3-5 minutes long and yet sound like epics. That’s a neat trick that the likes of Magnum can pull off, and Bob Catley’s lads might well be proud of “The Devil Rides Tonight” themselves.

The last one “They Kingdom Come” was written before the war in Ukraine, clearly, but it’s words about the futility of conflict are especially poignant right now and you imagine with these leaders and the circumstances we find ourselves in, it will continue to be the case, sadly. It ends the album on a thoughtful note, but the guitar solo that Burns plays to end is uplifting and in this respect is almost the light at the end of the tunnel.

“Road To Eden” is an album to think about and digest. The other week I wrote that FM’s new one was the best album of its type that would be released this year. Dare have, well, dared to make that look a bit of a premature statement, because this is truly as classy as it is wonderful.