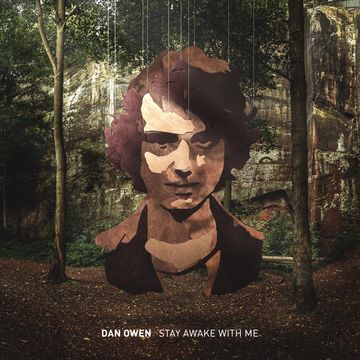 Hailing from the market town of Shrewsbury, Dan Owen has certainly put his shift in. This twenty-five-year-old Shropshire lad has been playing pubs and blues bars since the age of thirteen.

After a few single releases that have had much acclaim, he now issues his ten track debut album ‘Stay Awake With Me’ The opening cut `What Is A Man` is a real joyful uplifting tune with a questioning chorus of “What is a man without a heart?” and the backing harmonic chorus replying immediately with “No one” A wonderful soulful offering to lead us in. The next three tracks are very emotive intense pieces with uncompromising lyrics. First up is an anthemic stadium lighter if ever there was one. `Icarus` a song that features spiralling guitars and expansive orchestral strings while Dan’s vocal abilities deliver a dark and hard-hitting story about drug abuse. `

Made To Love You` is a brooding song based around the subject of male domestic abuse. The third number `Fall Like Feather` is another tear jerker about a relationship breakup. A change of pace and tempo comes with the bluesy `Hideaway` a song that I’m led to believe is based around Dan coming to terms with losing his sight in one eye. A big ballsy Bluesy soulful tome. A couple of stripped back numbers are shared with `Hand that You Hold` showcasing Dan`s strong vocal with just a piano accompaniment.

The other `Stay Awake with Me` is a touching balled written as an ode to his late treasured grandfather written from the point of view of his grandmother. The pair met as teenagers and spent five decades together. A sparse atmospheric submission with just a piano and Dan`s heart-wrenching vocals.

Sandwiched in between these numbers is `Parachute` a more buoyant offering with some nice hook lines at the chorus. The penultimate number `Call My Name` is a haunting song with chanting vocals on top of a background of a hypnotic percussive beat with quietly blended guitar inflections and some elevating harmonies at the chorus and beyond.

The album is wrapped up with `Splinter` a real bluesy piece which gives a solid foundation for Dan to really showcase his rich and varied vocal range, At times the backing harmonies send this piece into the realms of a gospel number, quite an enriching way to close out the album, This album is a real grower, it will certainly need a few listens as initially it seems full of ballad come narrative introspective tunes but it will certainly grasp you the more opportunities you give it. This is a collection of personal stories and experiences, shared by a talented young musician who has a rich and deep vocal range and narrates tales from beyond his years. A star in the making.