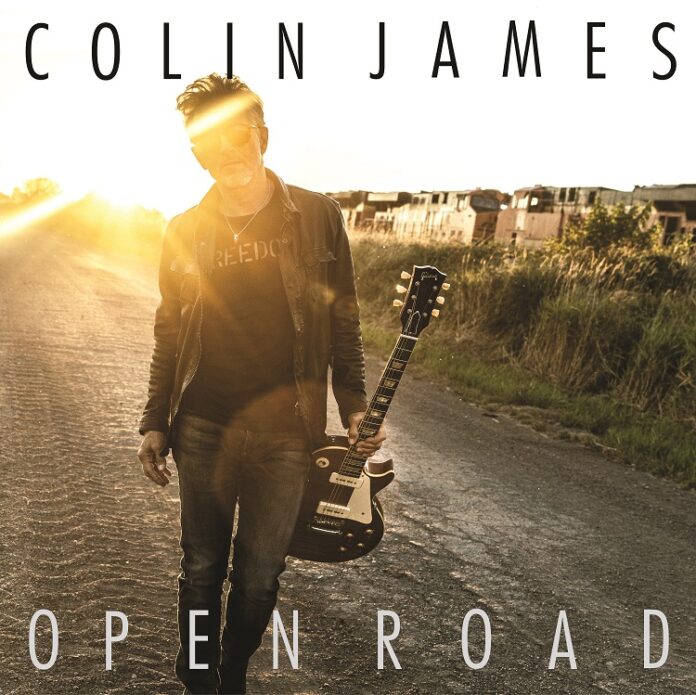 The title track here is tucked away a little, track four as it goes. It’s hook, though, tells a million things. “Another day, a story told,” sings Colin James. “Every life is an open road.”

On one hand, surely, that is the life of a road dog. One who has been on the road for 30 odd years, but there’s another side to this too. Colin James, I’d wager, has since he was a little lad growing up in Canada known what he wanted to do. His story has been one that sees the music almost chiselled into him like rock.

Stevie Ray Vaughan once told him, “I am opening doors for you. Walk through them.” Its fair to say he has, as well. A ridiculous amount of awards, and an opening slot with Keith Richards would be fine for anyone, but not for James. He’s credited with starting the swing revival in Canada too.

Which brings us to album number twenty. 33 years since his debut and three since “Miles To Go”, and “….Road” finds him in a slightly different mood. There’s more Americana in this collection than there was on the last one, that’s for sure. “As The Crow Flies” proves this very neatly for a start.

But this is a “pandemic” record. “…Flies” is a cover of an old Tony Joe White tune, but the words very much apply to the last 21 months, and with long time producer Dave Meszaros working in London (this was mixed at Abbey Road) and the band not able to get together as often as they liked, it was a different way for James – a self confessed collaborator – to work.

The band, though, are such a well-oiled machine, with such skill, it doesn’t really matter. The blues of “Can’t You See What You’re Doing To Me” – and the scorching lead breaks are as good as any you’ll hear – or the more soul-filled “That’s Why I’m Crying” both, in different ways, showcase the gorgeous organ of Steve Kendall and Jesse O’Brien.

Stevie Ray Vaughan’s “Change It” stomps in, while “Raging River” has a Bonamassa feel, as the self-penned one comes in with some widescreen flourish’s and the rock n roll boogie of “Leave This House” (co-written by James and Tom Wilson) is as timeless as anything from The Georgia Satellites as well as being just downright good fun.

“It Takes Time” is your standard 12 bar one, but you can’t resist it – and the harmonica is glorious – and you can virtually hear the band having the best time on the huge sounding “There’s A Fire”. It also takes balls to cover Dylan – even more so to make it your own, as he does on “It Takes a Lot to Laugh, It Takes a Train to Cry.”

“Bad Boy” is another cover, and credit to James again for taking on John Lee Hooker and making him sound like he was from Saskatchewan. Indeed, a feature of all James’ work (that I know anyway) is that when he does a cover, you’d never know unless you knew. “Down To The Bottom” for example, sounds – here at least – like a US Radio staple instead of an old Willie Dixon song, and even though I am fully aware of Otis Redding’s “More Than Words Can Say” then here James and the boys own it, but not competing with it.

That’s what Colin James does, not just on “Open Road” but throughout his work in general. He is fully aware that he is standing on the shoulders of giants, but rather than copying, he is busy finding his own voice.