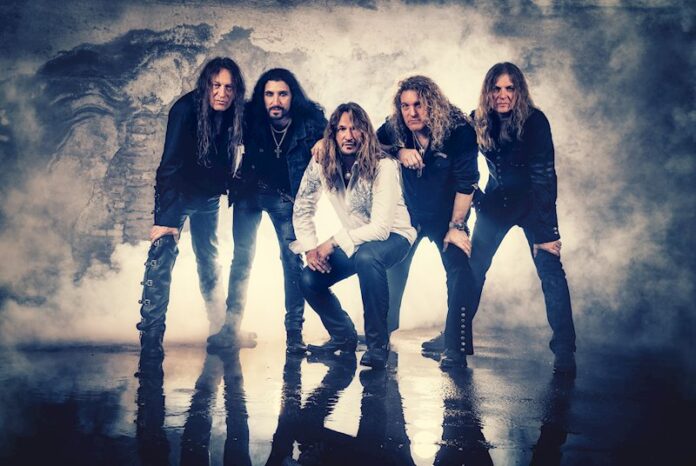 Today, they released their brand new single “You Lit My Fire” and the accompanying official video that’s available on https://youtu.be/Vz5Rq8u7ii4

You can check out the lyric video for the previous single “I Am Rock” on https://youtu.be/SR4XL6Khw4k

The band’s 11th album will be available as a CD Digipak with exclusive bonus tracks, a limited edition box set as well as in digital formats – you can already pre-order it here » https://lnk.to/crysteria

The “CRYSTERIA” box set will include the album’s CD Digipak, a flag, a patch as well as a hand-signed autograph card.

A strictly limited vinyl LP edition is planned as well, the release date will be announced soon.

Ronnie Romero (Rainbow, MSG) joins the band as a guest vocalist on the song “Call Of The Wild”, and CRYSTAL BALL’s longtime friends and label mates JADED HEART join them for a band duet on the song “Crystal Heart”.

“CRYSTERIA” was produced, mixed and mastered by Stefan Kaufmann, who also contributed additional lead guitars to four songs on the album

The album “CRYSTERIA” opens a new chapter in CRYSTAL BALL’s history. In their 3rd decade, the band is far from just repeating itself, and you can find new, fresh, and energetic elements in their music.

CRYSTAL BALL took its time during the pandemic-related break to write lots of new material, so they could choose from over 30 Songs for the “CRYSTERIA” album.

CRYSTAL BALL’s new guitar player Peter Berger also contributed many songs and ideas to this album. He was a very refreshing and motivating input.

The production of “CRYSTERIA”, that was taken care of by Stefan Kaufmann, improved even further and reflects the bands live energy perfectly.

The album features the vocal duet “Call Of The Wild” with Ronnie Romero (Rainbow, MSG) whom the band got to know at a festival in Switzerland in 2018.

The album also contains the band duet “Crystal Heart” with the guys from Jaded Heart. This song was written by members of both bands.
As both bands are friends for a long time, CRYSTAL BALL invited Jaded Heart as special guest on their planned headliner tour in 2022.