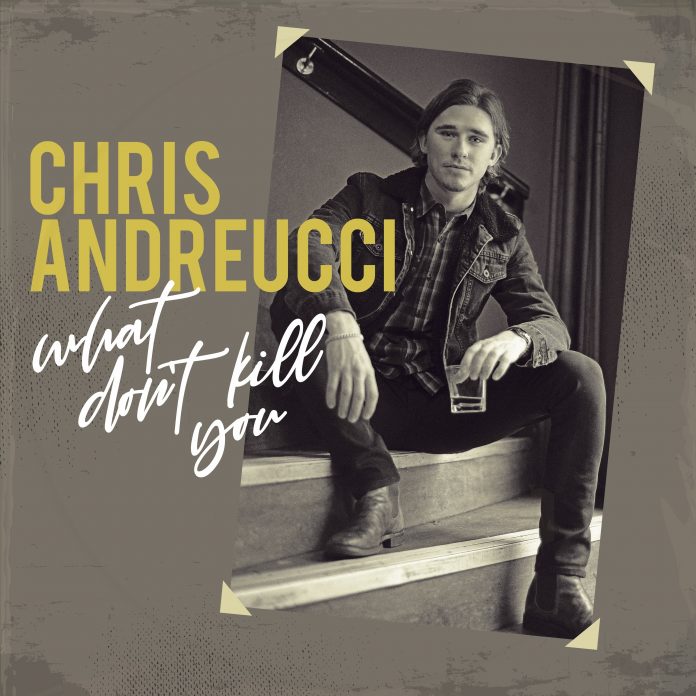 It sounds like a bad Alan Partridge sketch, but it’s actually my reaction upon reading that Chris Andreucci was Scottish.

It really was up there with the great bombshell’s in history. Like finding out Santa isn’t real, like finding Darth Vader was Luke’s father (for more modern readers, like the Colleen Rooney Instagram post that ended with the words “and….that was Rebekah Vardy”.

Anyway, the point is I’d already listened to “What Don’t Kill You” a couple of times before I was arsed to read the press release that came with the EP, you know, the one that said where he was from.

The scamp caused a rapid re-write of my notes too, all those references to US chart bothering country stars, like Chase Rice, Chris Stapleton, Eric Church, Eric Pasley, they had to go.

Well, actually no. They don’t. See, this six tracker is so fixated on America (he even sings in a US accent for good measure) that they all still apply.

Listen to the open riff of “Here Comes The Rain”. There’s only so many ways you can write “blue-collar”, “dirt roads”, but that’s kind of the point, Andreucci not only knows his market, he is delighted to be aiming for it.

A bit of a southern rocker, in the vein, say, of Whiskey Myers, he and the stellar band he’s using have got the sound sorted.

Typical, perhaps is “Tonight I’m Yours”, surrounded by some of the finest session players around Nashville (you name them, from Tim McGraw to Taylor Swift, they’ve played with them) this is polished and absolutely ready for stardom.

“Drinking Song” is so ready for the US Charts it might as well drape itself in the stars and stripes, but goodness me, if this was one of those American country stars that I seem to listen to each week, they are already huge.

“Thunderstorms And Rain” does – with the benefit of hindsight – have a bit of a Celtic touch, sort of like one of those Del Amitri widescreen ballads, but it deals with sensitivity on the death of a loved one.

For my money, though CA is better when he’s doing the world weary, yet stoically upbeat ones. “The Only Love That Never Broke My Heart” is a prime example of what he’s brilliant at. Catchy, yet authentic, and the kind of anthem that will resonate.

“Freedom” has some real depth to it. Like he’s looking at the stars and dreaming. Dreaming of better days and dreaming, perhaps, of the Nashville life he’s always wanted.

Chris Andreucci has everything going for him. Is the next country star to be a bloke from Scotland? Don’t bet against it. Not on this evidence.