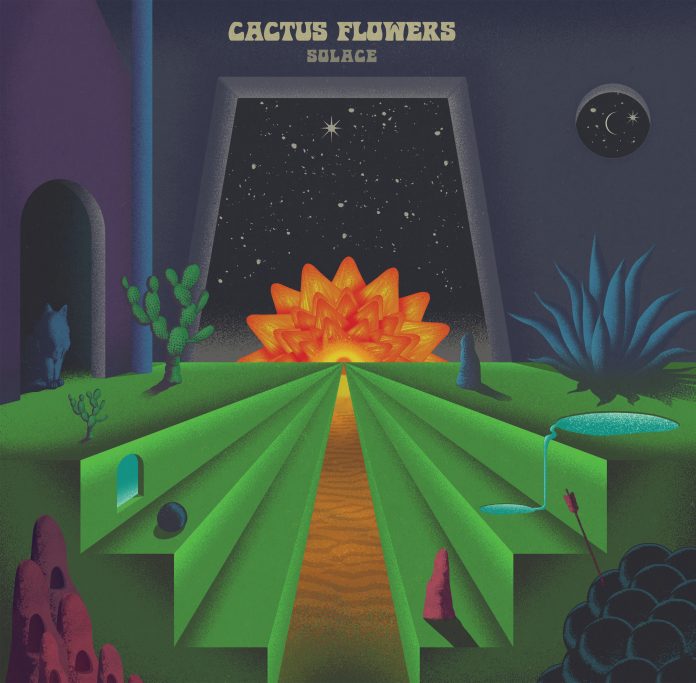 This morning, I was driving to work and had an epiphany.

See, I review a record every night. And it struck me that when you do it, you use language in a way that you’d never use it in any other facet of your life.

Take  “Solace” for example. There I was, on the way to work, listening to the opening “Razor Blade”, making mental notes for phrases I was going to use later when I wrote the thing. “Pulsing”, “energy” there were two. “Groove”, “incessant” there were a couple more.

Lets be honest, these words are in to make it look like I know what I am talking about, and they are better than the bland wiki entry opening: “Cactus Flowers, were formed in Houston in 2014 by guitarist/songwriter Jessica Murillo; drummer Mark Carcamo and bassist Chris Dunaway.”

So the fact I am rather hoping you understand what I am talking about…..that is, and lets throw some daylight in upon the magic here, shall we? I haven’t got a clue how to describe the four songs here, which given it is rather the job of a record reviewer is a bit of an issue.

The problem is this: on one hand this is full of dry as dust Kyuss type riffing, but then Murilio sings. She doesn’t sound like any “desert rock” that I’ve ever heard, that’s for sure. The lyrics are more rooted on planet earth too, but while this is going on, there’s some weird psych things occuring. And, yes there’s an energy, because the momentum here is fast, almost punk.

There’s a groove too. Loads of them, as it happens. “Do You Want Me?” is built on one, and the bass is as to the fore as it is on metal, but this is no metal band. In fact, Murillo has a bluesy quality.

“Swimming Through A Sea Of Mercury” adds a bit of an Orange Goblin flavour. Which is about the last thing you can deal with, given that Ben Ward incanting his words from the deep is the last thing you expected here. The second last, actually is the thunderous cymbals.

To top the lot, “Dirty Double Vision” is a slice of proper sleaze. Its – as you have worked out by now if you’ve been paying attention – hard to quantify why it sounds so filthy. Is the phrase “it just does” acceptable in a review? It is now.

So look, here’s what we know. Cactus Flowers are a three piece rock band from Texas. They aren’t ZZ Top. And that’s it.

So, if you are intrigued – and you should be – just listen to it and make your own mind up.

If you want to use a quote from this make it this one.  Find solace in the fact “Solace” is ace.

Previous article
KITT-ED OUT
Next article
BAND OF THE DAY: SUBTERRANEAN MASQUERADE