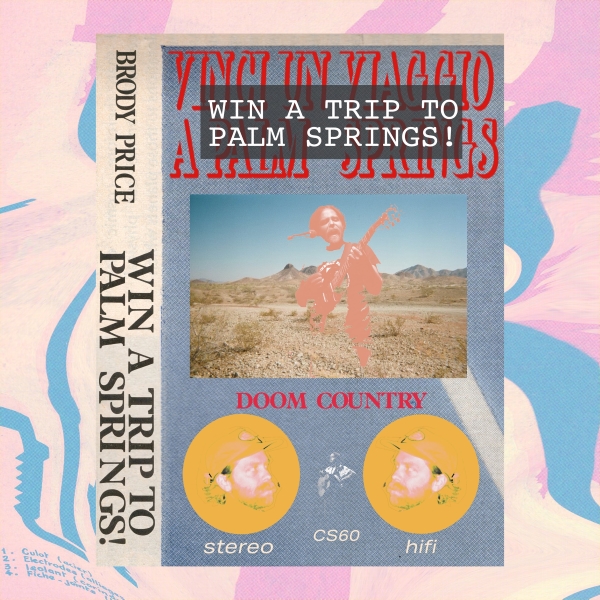 Brody Price is a Dallas-based artist whose debut album `Win A Trip To Palm Springs!` is released this month.

The album opens with `If I Were You` which has the sound of a door opening and heavy footsteps walking  across a wooden floor as the singer, I assume, picks up an acoustic guitar. What follows are some quite introspective thoughts on what seems to be the end of a quite demanding relationship. It feels as though you are privy to something that maybe you shouldn`t be party to, such is the intensity of the piece. The track closes out with some wistful steel guitar tones.  There`s a kind of strolling acoustic guitar riff that leads us into and through `Dying When I Met You` which appears to commend the influence of somebody that has come into your life just at a time that things seemed to be heading out of control. As the number progresses we enjoy the addition of some fuzzy electric guitar, pedal steel, and percussion as it veers of in all sorts of directions.

I read that `Fall` is about a revolving cycle in which the singer makes mistakes, feels regret and remorse for those mistakes, changes course based on what he`d learned from the experience, and then finding himself right back in the same situation. It`s a delightfully mesmeric offering with piano and pedal steel tinges and a shuffling percussive accompaniment before closing with some contemplative whistling. The inner turmoil we all suffer at times is expressed in the insightful `It Was You` Although the subject matter is filled with anxiety, the song has a thoughtful summery feel.

`Love I Hope You Stay` felt like an old time country tinged ballad with piano and pedal steel adding to the overall illusory ambience of the piece. There was a real dreaminess about the mid paced entrancing `Way She Moves` where I started to drift off into my own inner contemplative musings.

`I Don’t Wanna Play Anymore` had a wonderful meditative quality with lyrics that seemed to reflect on the apprehensions we all endure in this life and our complex phobia on our mortality.  We have further contemplative reflection with `Outgrown` which springs from a comment made by a partner which leads to a late night deliberation. The slightly off kilter musical accompaniment perfectly reflects this pragmatic nocturnal analysis.

The singer has shared that `Satellites & Dust` was inspired by “Tracy K. Smith`s ‘Life on Mars’ collection of poems, especially one called ‘Don’t You Wonder, Sometimes?’ When I think about the size of the universe and all the other suns and stars and galaxies out there it causes the clash of the meaningless and miraculous”. There`s a kind of otherworldly almost ethereal  texture to the number as if seeks meaning to something that maybe we`re not supposed to quite comprehend.  The album closes out with `Waltz` which is a striped back rumination on what seems like a cross roads in life and which route to take.

The album is at times darkly introspective but touches on subjects that i`m sure will resonate with most of us. It needed a few listens, for me to begin to appreciate it`s complexities not only musically but lyrically. I would certainly urge you to spend that time as this album will richly reward you.