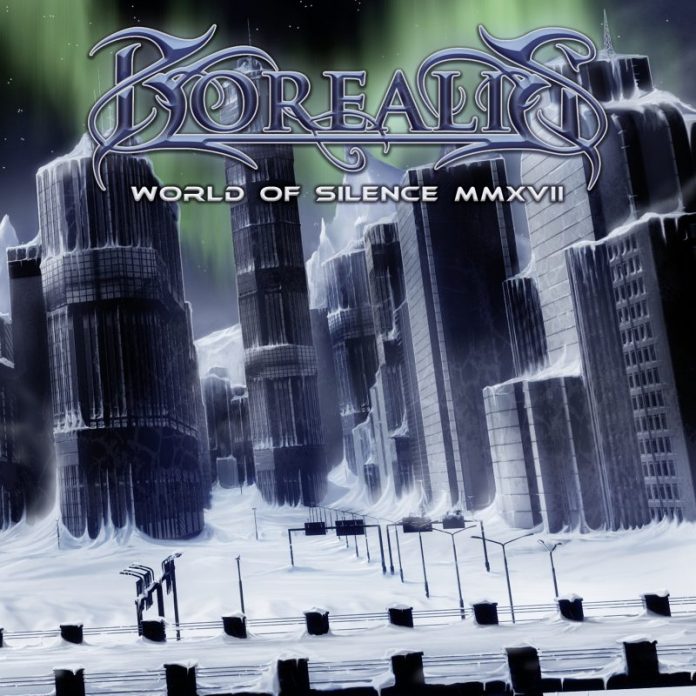 Out with the old and in with the ….old

So “World Of Silence MMXVI” isn’t really a new album at all. Except it kind of is. Confused? Well, the key to all this is the MMXVI part at the end of the title.

It originally came out in 2008 as a self-released debut album from Canadian Power proggers Borealis. Fast forward nine years and its here again, as their first record for their new label.

As they rightly observe a lot has happened since then (not least the five piece have merrily stuck out another two albums to huge acclaim. And perhaps because of the passage of time, and almost certainly because they are better now than they were then, Borealis decided that a simple re-issue wasn’t good enough. Nor a remix. No, for these boys, it required a full on re-record of the thing, and they’ve done it with absolutely stunning results.

“World Of Silence” is a brilliant record. A crushing cross between Power and Prog Metal (and lets not be beat about the bush, fans of Symphony X will find much to enjoy here) it is without let ups in intensity from start to finish.

Heavy as you like – and the opening riff to “Lost Voices” alone convinces you that this isn’t a record that is prepared to be demur in any way – but also with a wonderful use of keyboards and orchestration to give it the just the right amount of grandiosity, “….Silence” is a record with more thrills and spills than it is has any right to have.

The drums on “Midnight City” are almost thrash, and although the dual guitar attack of Mike Briguglio and Matt Marinelli (also the fabulous singer here) meld together, this is not some pompous NWOBHM pastiche. Instead, this is clever and nuanced, and if we may be so bold, perhaps it is thinking man’s metal.

“World Of Silence” deserves that epithet, given that it is capable of a gentle flourish, although even the ballads can’t resist hitting bombastic levels, as “From The Fading Screams” proves rather amply as it reaches its stunning crescendo.

“Forget The Past” mixes metal with strings as well as anyone has, and for nearly seven minutes “Eyes Of A Dream” does the same, at the same time as it adds a level of incessant urgency, while the title track is a real thumping affair. The drum work from Sean Dowell (who’s studio this was recorded in) is superb throughout, but seems especially mighty here.

The rest of the record doesn’t deviate from this path, too far. “The Afterlife” sees Marinelli really channel the spirit of Russell Allen, and if “Divine Answer” is ostensibly gentle, then there is still a suspicion that it is merely holding itself back from being used on the soundtrack of some Hollywood Blockbuster

A record that brings a whole new meaning to the word “huge”, throughout, but nowhere is “World Of Silence” bigger  – or indeed less silent – than on “The Dawning Light”, which is a real highlight amongst ten, and by the time the genuinely cinematic “Black Rose” has ended this, there are only two thoughts to have.

One, where the hell has this been for nine years. And two, when is the next one? The answer to the second part is there’s a new album this Autumn, but the answer to the first bit is rather more subjective. How about this: it doesn’t matter if it passed you by the first time, only that it’s here now and you just have to hear it.