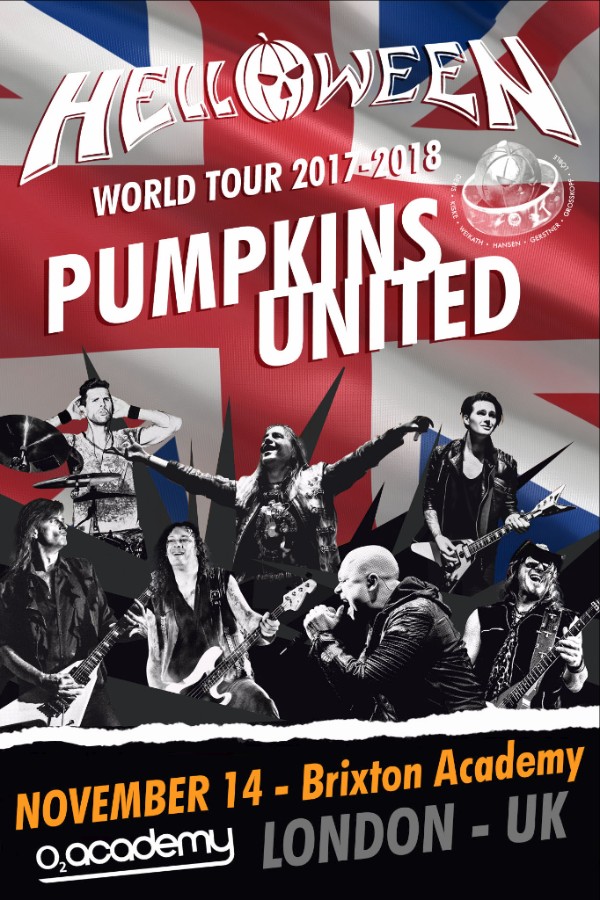 Here comes the sensation for all HELLOWEEN fans: You believed in it for years and continued to ask for it – now is the time: In fall 2017, Michael Kiske and Kai Hansenwill once again mount a HELLOWEEN stage together and resurrect the band’s legendary original line-up. Yes, it’s official: Weikath, Kiske, Hansen, Grosskopf are going to play HELLOWEEN classics live and on a joint tour. Massive news. Awesome. But you might want to sit down again, because that’s not all of it! Under the flag PUMPKINS UNITED all pumpkin heads will step up – meaning Andi & Michi on vocals, Kai & Weiki & Sascha on guitars, and Markus & Dani in the rhythm section.

PUMPKINS UNITED WORLD TOUR 2017/2018: GOOD. AS. IT. GETS.
The band have also announced this special line-up will also take to the stage in the UK, for a one-off show at London’s Brixton Academy on the 14th November.
The band commented ‘The only PUMPKINS UNITED concert in the UK has been confirmed!
BRITISH HELLOWEEN MANIACS – let us rock the O2 Brixton Academy in London together on the 14th of November 2017 and make this evening something unique! Tickets will be on sale next Monday!’

THE IDEA.
Undisputedly, HELLOWEEN are one of Germany’s most respected metal exports and considered the founders of German melodic speed metal. As godfathers of the genre, they have grown to become one of the most influential metal bands of the planet. In an unbelievable career reaching back as far as 1984, HELLOWEEN have performed at innumerable metal festivals around the globe such as Rock in Rio,Loudpark in Tokyo, Wacken, or the Woodstock in Poland, which they headlined in front of over 500,000 fans.

The band has delivered countless headliner world tours, spectacular shows with the likes of Iron Maiden, Black Sabbath, Dio, Slayer, or Ozzy Osbourne to name just a few, and played at exotic locations in Borneo, Indonesia, Manaus, Brazil, or, at over 10,600 ft in the world’s highest capital, La Paz, Bolivia. The band’s spectacular show at the ‘Monsters Of Rock‘ festival in Castle Donington in front of over 100,000 metal heads in 1988 was just as memorable as the massive MTV ‘Headbanger’s Ball‘ US tour with Anthrax and Exodus. Including genre masterpieces ‘Keeper of the Seven Keys’ Part I & II, they’ve released 15 studio- and three live albums to date, selling over eight million records and earning fourteen gold and six platinum awards. For 30 years, HELLOWEEN have been delighting their fans with fantastic riffs, great songs, and haunting melodies – three decades of a global career they officially celebrated with the ‘Hellbook‘ in 2015. This is when the idea for PUMPKINS UNITED was born: The ‘Anniversary Bible’ as well as touring with Kai made them realize that this band’s story is demanding its next chapter. Or, as Michael Kiske describes it:’Playing an original HELLOWEEN track with Unisonic was quite a flashback already, but rocking with the original line-up and Andi will be something really special. The time has come!’ The chemistry between Kiske, Hansen, Weikath, and Grosskopf is singular – and sees its revival not least because of you: You’ve never stopped asking for it – now the mega event is coming up live, with the complete cast, and heavily wired!

IN DETAIL.
The super tour’s first confirmed date is October 28, 2017 in Sao Paulo and takes the full PUMPKINS entourage across selected cities and venues in Latin America, Europe, Asia, and the US. An extremely big deal, which, including a few secret surprises, will present almost three hours of the biggest hits from three decades ofHELLOWEEN as the band will obviously insist on performing a full-speed trip through the HELLOWEEN repertoire. ‘We already had an awesome time on the Hellish Rock part 1 & 2, but this time we’ll definitely double down on it’ says Kai Hansen, and Markus Grosskopf adds: ‘There’ll for sure be songs that we haven’t played in a very long time or even ever before.’ Whoever doesn’t secure tickets for this tour, probably doesn’t have all their pumpkins in a row: The original line-up wants to celebrate a global party with you, which is also going to be highly emotional because this SPECIAL WORLD TOUR is actually not a reunion and most probably won’t happen again. Andi channels our metal hearts when he says: ‘I’m so much looking forward to playing Michi’s and my tunes together with him live on stage. It’s going to be absolutely exceptional.’

Tickets for the London show on the 14th November go on-sale next Monday 23rd January.