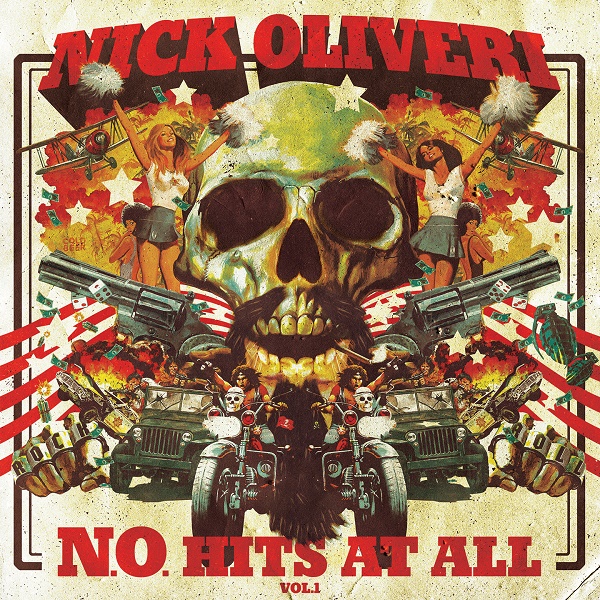 Nick collects his rarities together

MV never quite got over seeing Nick Oliveri naked. There we were at the Birmingham Academy one Sunday night in the late 1990s watching Queens Of The Stone Age when the next second, he was starkers and, ahem…little Nick was waving about.

It’s a memory we prefer to supress, but it came flooding back when this arrived.

Oliveri is, as everyone reading this knows, no longer in QOTSA (clothed or otherwise) but he is one of rock n roll’s most prolific recorders. Appearing on over 50 releases in his 25 years, some of which have seen the light of day and some have not. Which is where this comes in.

“N.O Hits At All” aims to collect some of these together and volume 1 features six tracks that do just that. “Lockdown” by Komatsu is a real thumper, “Anything And Everything” with Death Acoustic is filthy punk rock done on an acoustic guitar and “Revenge” with Winnebago Deal is 54 seconds of furious rage, which is exactly the kind of thing that used to be on b-sides back in the day.

A cover of Motorhead’s “Speed Freak” with The Svetlana’s seems to be every inch what this collection is for and glorious fun to boot, while “Time To Think/Surf And Destroy” is another Death Acoustic song and is drenched in feedback, while “Eccentric Man” sees Oliveri working with Ken Pustelnik’s rock n roll heroes The Groundhogs and strutting like The Stones and getting almost funky.

By definition this is going to be a hit and miss affair and so it is here. Some work, some don’t, but that’s just fine. It is better, surely that these songs see the light of day rather than gathering dust in some studio. For the most part the six songs here, showcase a rare and vital talent.