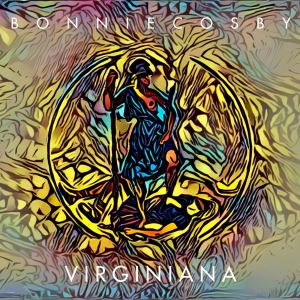 Bonnie Cosby is a Richmond-based artist who has recorded with the likes of Bleach Everything, Arepo, and Gregor Samsa. She has her debut EP `Virginiana` released this month on which she sings vocals and plays guitar, violin, and musical saw. On this release she is accompanied by members of Bleach Everything and Gardener, with Ricky Olson on drums, keyboards, and synth, Duncan Adams on guitar and bass, Graham Scala providing guitar texture/effects, and Dash Lewis adding modular synth. The album confronts subjects such as mortality, embracing sobriety, and finding oneself in the middle of drastic social change. Bonnie started working on this album in 2018 as a tribute to her cousin who struggled with addiction, and ultimately took his life. She also decided to start living a sober life and by creating this album and becoming sober at the same time helped her restore faith in herself and in her community of musicians.

This extended play opens with `Midnight Man` with twinkling synth, a soft drumbeat, distant bass and wistful guitar chords and Bonnie`s gentle vocal delivery that seems double tracked on this dreamy pop number. A delightful number to ease us in on. There`s a more ethereal texture to `Angel Tree` which is quite stripped back at times which gave it an interesting edgy feel. A track that had a kind of retro vibe and could have come out of David Lynch`s murder serial `Twin Peaks`

The singer has shared that `Three` “has many multiple meanings in this writing process. It’s my third year of sobriety, I wrote and recorded the record in my third trimester of my pregnancy, and it was the third song written of the set of songs recorded in 2021. So, the entire album was recorded over three years as well”. It`s another mesmeric dream folk pop track that I felt I was being sucked into. I thought that `Change` was another submission that began quite cinematically before it took a bit of a curve ball and had a slightly off kilter guitar drum and vocal passage. This variety in tempo continued throughout the rest of the song`s journey. Wonderfully compelling.

`The Moon` had a more quirky almost Americana sense to it, a number that was a little unusual but fresh and all the more appealing for it. We close with `Dark Horse` another arrangement that feels a little surreal. It`s not quite austere but quite bare which allows the vocals the opportunity to shine. A composition where maybe Dark Horse is a metaphor for something deeper.

There was much to relish and savour on Bonnie Cosby`s debut `Virginiana`. It`s been categorised elsewhere as dreampop tinted with hints of psychedelic texture and that is probably a good way to describe it. This multi-instrumentalist has a delicate, elegant, and exquisite vocal range and used it to full advantage on this dreamy, folky quite haunting release.