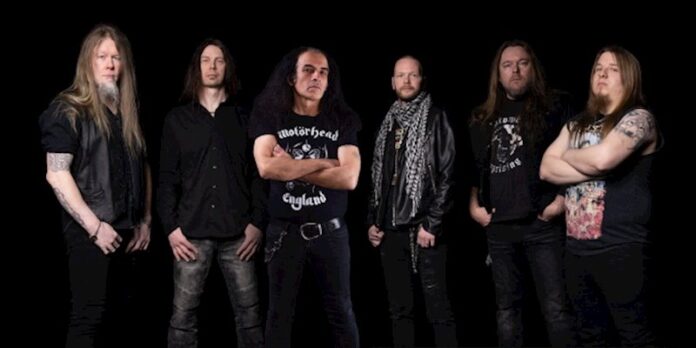 BURNING POINT release new single ‘Hit The Night‘, album ‘Arsonist Of The Soul’ is set for release on 22nd Oct on AFM Records.

Following their latest, much acclaimed album, The Blaze (2016), Finland’s melodic heavy and power metal force BURNING POINT is gearing up for the release of their forthcoming, eighth studio album.  Arsonist Of The Soul will be out on October 22, 2021 through AFM Records.

For more than two decades of existence, mastermind/guitarist/songwriter Pete Ahonen always kept the ship on route, his clear vision and artistic integrity made BURNING POINT one of the most reliable purveyors of excellent classic power and heavy metal. After handling the vocals on his own from the band’s foundation in 1999 up until the arrival of Nitte Valo (ex-Battle Beast) in 2015, on their upcoming album BURNING POINT introduces their new vocalist Luca Sturniolo.

Replacing Valo, Sturniolo turns out to be quite a discovery; his powerful, varied vocals perfectly match with Ahonen’s fiery fretwork and strong, experienced songwriting. Besides Ahonen, Sturniolo and Pekka Kolivuori, now bassist Jarkko Poussu (ex-member of Finnish thrash pioneers A.R.G.), Tuomas Jaatinen on drums and Matti Halonen (Keyboards) have joined BURNING POINT.
“I am extremely happy about the new line-up and the new record. All the guys are very, very talented and excited!“, Ahonen recently said.

BURNING POINT have unleashed another killer appetizer taken from Arsonist Of The Soul, as their new single “Hit The Night” has just been premiered!”
“Musically it’s a great mix of Judas Priest (Painkiller era) with a huge stadium size chorus you can pump your fist and bang your head!” Says Pete about the new song. Vocalist Luca adds: “The night is normally the moment when people go out to have fun, escaping from the avarage life, the cage where they are prisoned doing most of the times a job they don’t like to make out their living, so hit the night regenerate your soul till the morning light.”

A little heavier than on their last album and featuring twelve blistering, razor- sharp tracks, BURNING POINT’s characteristic melodies are the distinctive core of the band’s sound, shrouded in a captivating depth of powerful melodic heavy metal and epic hard rock anthems.

BURNING POINT’s new record was mastered by Juanne Huotari, and shines with its pleasant throwback to early 2000’s heavy metal sound, but with up-to-date production the band is known and loved for. With Arsonist Of The Soul, they definitely raise the bar once more!

Coming out on October 22, 2021 and available as LP, CD and Digital formats, the album pre-sale is now available at THIS LOCATION!