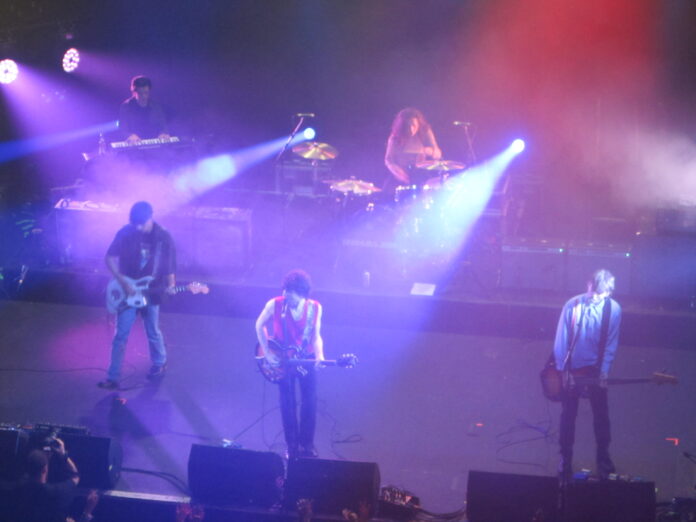 The main support for tonight is The Isle Of Wight`s Post-punk duo Wet Leg comprising of friends Rhian Teasdale and Hester Chambers. The duo are tipped for big things and give us a brief taster tonight of just why. This short set which was fleshed out with a five piece outfit comprised of songs such as the stop start `Oh No` and `Supermarket` but for me the highlights were the two recent singles `Wet Dream` a breakup song of sorts and the final offering tonight

`Chaise Lounge` with the cracking ironic line of “ Hey you in the front row, you coming backstage after the show, coz i`ve got a Chaise Lounge in my dressing room and a pack of warm beer that we can consume” . Wonderful earworm songs. They are back next month in Birmingham supporting Shame and if you can make it, be assured they won`t disappoint.

Inhaler are a Dublin four piece indie / alternative rock band that consists of vocalist/guitarist Elijah Hewson, bassist Robert Keating, guitarist Josh Jenkinson and drummer Ryan McMahon. They have released nine singles and their album `It Won`t Always Be Like This` was released in July to much acclaim. It`s probably best to address the elephant in the room straight away, Elijah Hewson’s father is U2 singer Paul David Hewson, a.k.a. Bono. This rescheduled date was sold out long ago and the anticipation as we await the guys to appear is palpable for the 1500 faithful crowd who manged to acquire tickets for tonight.

The guys hit the stage and it`s straight into the album`s anthemic title track `It Won`t Always Be Like This` before they share `We Have To Move On` and the crowd are already singing along. The pace levels out with `Falling In` and the restrained quite dreamy `Slide Out Of The Window` where touring keyboard and synthesizer player Louis Lambert adds some subtle touches.

The fellas offer up the reflective `Ice Cream Sundae` before they up the tempo with the blistering `When It Breaks`.

We enjoy a further six cuts from the latest album with the pick for me being `Totally` with the crowd belting out the lyrics and the captivating `Cheer Up Baby`.

This hour long set closes with `My Honest Face`, a final track from their album and to me you won`t hear a more appealing number than this with its chugging guitar riffs, steady drum beat and enchantingly shared vocals. A song that is a sheer delight.

It was an interesting night for me as I saw U2 supporting Fashion at the Cedar club in Birmingham in July 1980 when Bono was just twenty years old and would release the album `Boy` a few months later and here tonight I get to see his son Elijah at twenty two with an album already released. Understandably they do sound similar vocally and Inhaler`s `It Won`t Always Be Like This` does share some of that same rawness and catchy melodies of `Boy`.

But these four Dubliners are carving out their own path and on the strength of what was on show tonight, the World is definitely their Oyster.