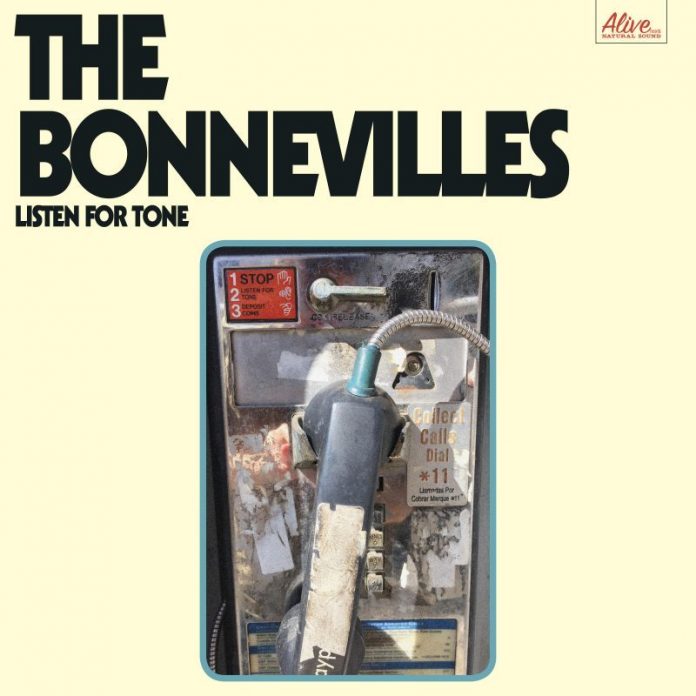 They say as you get older you get more nostalgic.

Whether that’s true or not MV was transported back into the dim and distant past when, urmm, listening to “Listen For Tone”.

In the late 80s growing up, there was pretty much nothing we loved more than making a compilation record. The holy grail was one side of a C-90 TDK tape (anyone under the age of 40 can ask their parents – or Wikipedia) of a best of one of your favourite bands.

It’s great to see that such an idea has been updated for the modern age – because that is basically “Listen For Tone” in a nutshell. 10 glorious songs that originally appeared on The Bonnevilles early pair of records, and if the pretext to all this is that it is the first time they’ve ever been out on vinyl, then the day we need a pretext to listen to the wonderful music that the pair create, frankly is the day we pack in.

Making perfect sense given that it is ten years since their formation and coming hot on the heels of the outright brilliant “Arrow Pierce My Heart” record, “…..Tone” is a timely reminder – not that such a thing is needed – that no one does it quite like Andrew McGibbon Jnr and Chris McMullan.

“Home” begins things in a shimmering, understated fashion, while “Machine Born To Think” comes in swinging with the dirty strut that they became famous for and “You’re Not Alone” distills the  thing down to the absolute basics.

Best of all here is “God Might Love Me (But He Don’t Know Me Like The Devil Does)” a track which captures the very essence of the blues. Indeed, it is tempting to think that if Robert Johnson had played this at the crossroads then he wouldn’t have had to sell his soul to Satan at all, rather yer man would have just given it away.

There are plenty of songs here that remain integral to the band to this day. “Hardtale Lurgan Blues” is a riotous affair still, so imagine what effervescence the original brings, and there is a strange kind of funkiness about “Some Of A Reverbio”

“Asylum Seekers Of Love” is concerned with not matters of the heart, but a bit lower down, while “Hell” extracts something from way down deep, and wherever “C’mon” wants you to go, then you really should follow it.

Things end with “10,000”. Familiar enough in structure, perhaps, many songs have after all suggested they were “going down to the river” from Springsteen to countless trad folk songs. Very few then add the words “to die” at the end of the line.

That, basically is The Bonnevilles’. They take something that you know and love, and make it scary. And they are stunning at it.