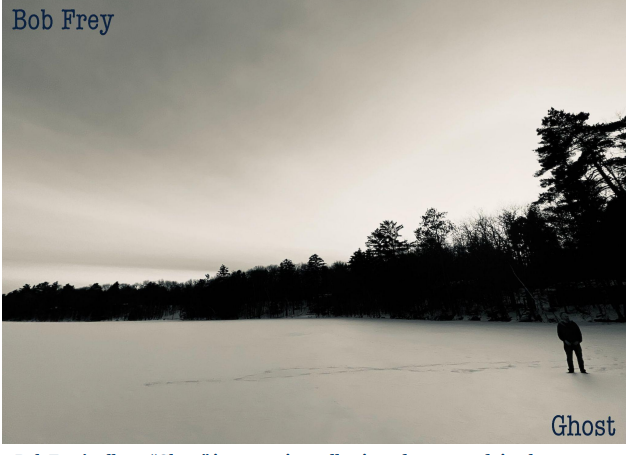 Bob Frey is a Minneapolis, Minnesota based singer-songwriter who is about to release his fifth album `Ghost` which is the follow up to his last release `LongShot Deal`. The musician himself has said that it`s “a very sparse and intimate record, recorded in the winter woods of Northern Wisconsin. I wrote all but a couple of these songs in the midst of my wife’s ongoing journey with Stage IV cancer, now 11 years and counting… To me, they have a very traditional feel, many resting upon very old lyrical forms of folk & blues”.

The album opens with `A Restless Heart And A Troubled Mind` with some grungy guitar riffs before an acoustic guitar leads us into this musing on a life that maybe if the narrator had listened to advice given, may have turned out brighter. The hint at regret is almost tangible in the vocal delivery and the addition of violin strings throughout adds that real touch of poignancy. I have to admit I had to look up the meaning of the next song `Paladin` and found that it`s a leading champion of a cause or a trusted military leader (as for a medieval prince). I does get mentioned during this tale which seems to hint towards the singer`s own relationship with his wife. A quite heartfelt offering.

I read that title track `Ghost` is a murder ballad, shared with a strummed acoustic guitar and violin tinges throughout. The lyrics as with most of this subgenre suggest the events of a possible murder and seemingly the haunting of the perpetrator.  Although the title may not suggest it, `Hard Luck Girl` was a more upbeat rumination on somebody that the chronicler knew.

`Guillotine` seems to relate to the singer`s wife`s illness and the couples way of coping. We have an amusing but probably quite insightful deeper contemplation with `I Wish I Was a Dog` a number that has an almost Americana vibe at times.

`Gig` seems to be a gentle reflective almost train of thought on the singer`s troubadour life and life in general. We have a song in `Movin` On` that was written with the singer`s son. It seems to have come partly from vivid dreams and has a quite melancholy harmonica segment just over midway. A pondering on a lost love maybe.

`Runner` has some enjoyable violin tinges throughout this piece written as a kind of reassurance to the singer`s wife. I suppose `Who`s A – Gonna Miss Me When I`m Gone` is probably a sentiment that we all ponder on at times. This kind of semi amusing reflection is a mix of blues with some nods to Americana thrown in.

`One More Time` closes the album out and it`s an achingly true profession of the singer`s enduring love for his wife and what she means to him. A difficult but rewarding listen. There is a bonus track with `Little Mystery` which is about an ill-fated relationship from the songwriter`s early days in Minneapolis. It`s a quite breezy reminiscence on what i`m sure was a miserable time to live through.

`Ghost` at times is a difficult listen. It`s not that it`s not enjoyable but that it`s an honest account or reflection on things that the singer is enduring or has lived through and with and you almost feel that your are intruding on something really personal. This singer–songwriter has a what I’d call a lived in vocal that really draws you in. At times I really felt that he had an inflection or tone that sounded similar to the sadly missed Vic Chesnutt,

I think at times you could read whatever you want from the lyrics so we can all take something away. It`s an emotional offering but i`m sure that is was quite liberating for the artist.

The message I will take from this album is that “Life is a journey to be lived and not a problem to be solved” and that`s no bad thing.