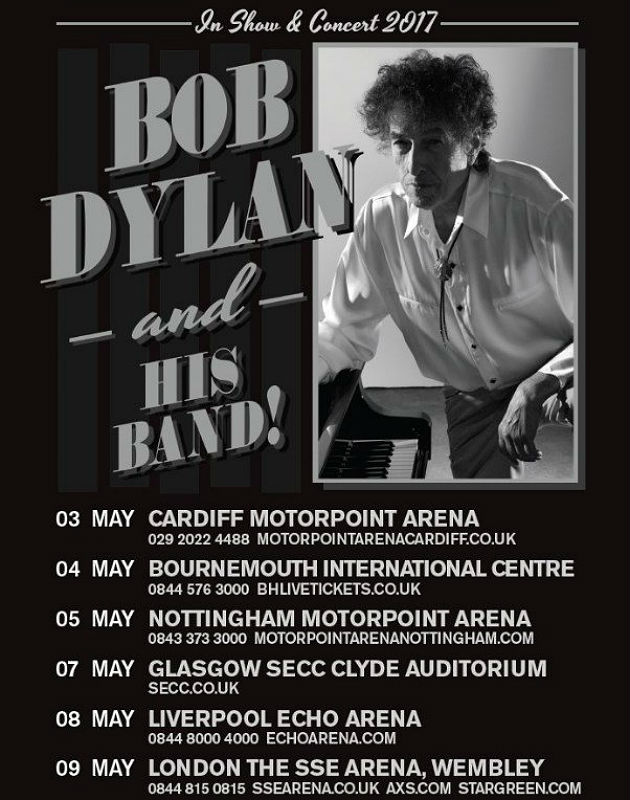 Nearing the end of his 75th year the Nobel Prize winning musician proves that he doesn’t need his trusty guitar and a harmonica to send a shiver down the spines of his audience.

The stage was surrounded by a dozen or so spotlights which gave the arena a welcoming and intimate atmosphere.  At 8pm sharp the band enter the stage and open with the Oscar winning track “Things Have Changed”. For those in attendance he shows that, for anyone not in the know, this is not going to be any ordinary evening.  It cannot be.

The bar-room shuffle of the original is tempered here with a light and breezy rendition more at home in the Jazz Café of Paris.  It’s a delightful re-interpretation of one of his many modern classic tracks and is a marker in the sand for the evening ahead.

Speaking of classics it doesn’t come much more classic than a triumvirate of “To Ramona”, “Highway 61 Revisited” and “Beyond Here Lies Nothin'”.  “Highway” inparticular is given an added urgency and grit both vocally and musically as the band seemingly turn up the volume.

At some point the idea of Bob Dylan, a man much derided in certain quarters for his uneasy vocal style, covering American Standards previously performed by the likes of Frank Sinatra and Billie Holiday, amongst many more great singers, who have seen person responsible for such a suggestion beaten and flogged.  That was before the vocal talent of Dylan was fully understood.

On tracks like “Why Try To Change Me Now”, “Melancholy Mood” and “Stormy Weather” he offers his own take and these classics and avoids trying to imitate past masters.  The arrangements and uniquely modern-day Dylan and each track is lifted by a sweeping and shuffling sound that gives an easy charm to the evening.

Inbetween the cover versions there are a couple of tracks taken from his last self-penned studio album Tempest and they continue the same easy following vibe of the evening despite the dark lyrical content.  “Pay In Blood” and “Duquesne Whistle” deserve to stand side by side along Dylan’s Greatest Hits and further down the road I’m sure they will be considered as such.  For now it just reminds the audience that age has not withered their hero not has time dulled his lyrical wit or musical guile.

Of course, Dylan being Dylan, he is not adverse to re-invigorating and re-designing his own back catalogue. There are perks to being the greatest artist of all-time and this is one.  There is a stunningly damning version of “Desolation Row” which followed and equally cutting version of “Early Roman Kings” and the lilting take on “Tangled Up In Blue”.

“Blowin’ In The Wind” and “Ballad Of A Thin Man” are the final two tracks of the evening to be performed and both are occassionally unrecognisable.  But in a good way.  A very good way.

Dylan has often been accused of deliberately ruining his songs in the live environment.  This notion is as ridiculous as those who opposed his Nobel Prize for Literature. If you want to listen to a track the way it sounds on an album then there are millions of bands, many very successful, who will give you exactly that.  If you want to spend two hours in the company of a musical genius who, at the age when most artists are happy to cash-in with a few appearances and a flawless rendition of their finest moments, continues to re-define his legacy and challenge himself and his audience then there is only one choice left available to you.  Bob Dylan awaits your presence. Just don’t expect him to shake your hand at the door on your way in.