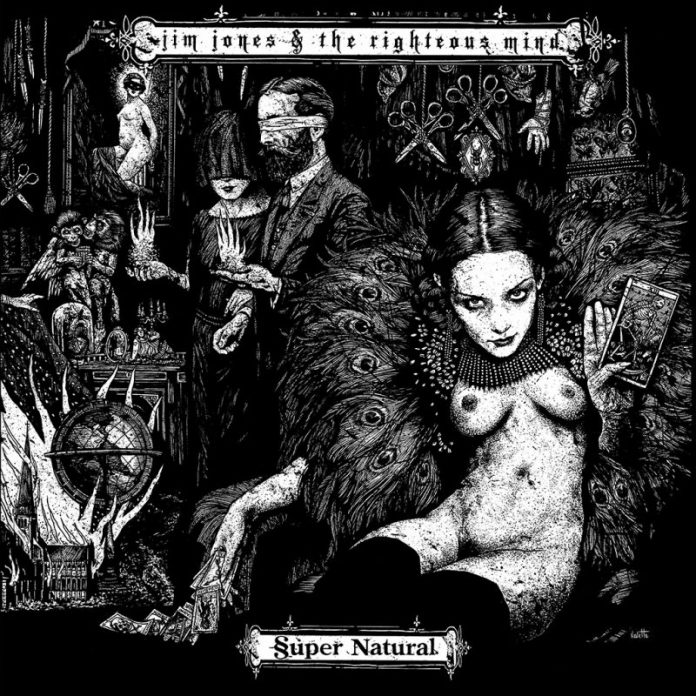 Something a little different from Jim

Never one to let the grass grow under his feet, it is said Jim Jones began recording what would become The Righteous Mind’s debut album five days after his previous band, The Revue played their last gig.

Now, after a couple of EP’s, it is time for the full fruits of those labours to be seen in the shape of their debut album, “Super Natural.”

Too savvy and too full of ideas to simply come up with JJR Mk II, instead JJATRM have the same gift for extracting something primal from rock n roll, but have much more swaggering, lip curling confidence.

“Dream” the opener, is a perfect introduction. Filthy, fuzzy guitar work, but with a gleeful piano riff behind to bring it back into the bar room – albeit some rancid backstreet boozer with who knows what going on in the alley out the back.

“Base Is Loaded” is the sound of the last gang in town, and you wouldn’t want to get on the wrong side of these boys. Likewise, “Something’s Gonna Get It’s Hands On You” is nothing short of lust set to music.

Nobody really does this sort of thing as well as Jim Jones. “No Fool” with its first line “I love you with all my heart, why don’t you feel the same?” would in other hands be a ballad. Here, it is a full-throated roar supplemented with screeching guitars.

This unapologetic feel permeates throughout. One of the bands early singles “Aldecide” is kind of a modern take on Leadbelly’s “Where Did You Sleep Last Night?”, while another, “Boil Your Blood” is a thumping, dirty track that summons up something from below.

If this new project (it also includes former Revue member Gavin Jay on bass) was born out of a desire to explore new realms, then nowhere is that better shown than on the trippy “Shallow Grave” and the psych tinges of “Heavy Lounge #1”.

“Till It’s All Gone” takes a simple rock n roll structure and gives it a twist by possessing a bass of the crushing type not heard since The Wildhearts released “Anthem” getting on for 20 years back, and the thought that Jim Jones really took the shackles off for this one is exemplified, perhaps by the ending swirl of “Everything But Me”. Genuinely unsettling, and delivered in the style of Tom Waits, it maybe shouldn’t work. But absolutely does.

Proof, if it were needed, of the skill of Jim jones to find something in music that others cannot. “Super Natural” is well named. It is super – that is almost a given of course. But really it does seem to come naturally to The Righteous Mind.