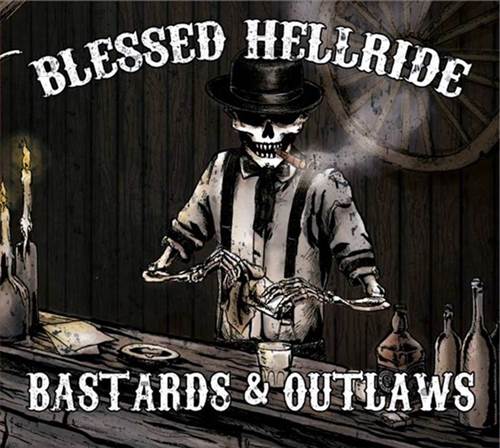 Blessed Hellride are from the south west. That much you could have worked out, probably, based on the name of the band and the title of this, their debut album.

What you might not realise is its the south west of Germany, and not the United States that provides these boys a home. Appropriately, they are from the town of Trier, on the banks of the Moselle and they have really tried (do you see what we did there?) to pull out all the stops here.

Ok, you know what it sounds like, and let’s be perfectly honest about this, Blessed Hellride couldn’t give two shits if this has echoes of other bands – and yes, one of those is Black Label Society – because “….Outlaws” is great.

It also sounds massive. Producer François Dediste has done a brilliant job of teasing out phenomenal grooves throughout the 13 tracks that make up this riff fest. Jack Stoned and Oos (probably not their real names if we are honest) on twin guitars make a magnificent racket and the whole thing is carried on the muscular rhythms of El Fritto on bass and Captain on drums. And if this really would live and die on the strength of the vocals, then Tiny Fuel isn’t found wanting, and on “Moonshine Saloon” he’s “kissing the lips of the whiskey whore,” and “raising a glass with the Cowboys from Hell” with the best of them.

By the time that song comes around – around halfway through the record – you already know what to expect. “Helldorado” has come swinging in like a wrecking ball in a fine china shop, happy to leave a trail of disaster in its wake, “Devil’s Ride” has got its windows down, it’s turbo on and it’s busily taking your girlfriend out for an….urmm ride, and if “Godamn Hippie” needs any explanation then you are reading the wrong site.

Yes, it’s rightly and properly – and gloriously unapologetically – heavy, but there’s a touches of difference, “Papa Joe” is Southern Rock, albeit in the style of the Texas Hippie Coalition rather than Lynyrd Skynyrd, and “Blessed Hellride” is a simple and effective anthem. Happy to metal things up elsewhere, as on “Overdrive Junkies”, which is surely designed to get horns up and heads banging, while the acoustic grooves of “Dead Man’s Blues” are mellifluous and a welcome pallet cleanser.

Perhaps the most ambitious thing here is “Gevatter Tod” – which is pure Zakk era Ozzy, and based on a Brothers Grimm story. They save the title track for last, so it can pound you just one last time.

The overall result is a record you’d guess is exactly the one that Blessed Hellride wanted to make in their wildest dreams. They’ve achieved all their aims and you can’t give it any higher praise, “Bastards And Outlaws” is great fun, and that’s all it wants to be.