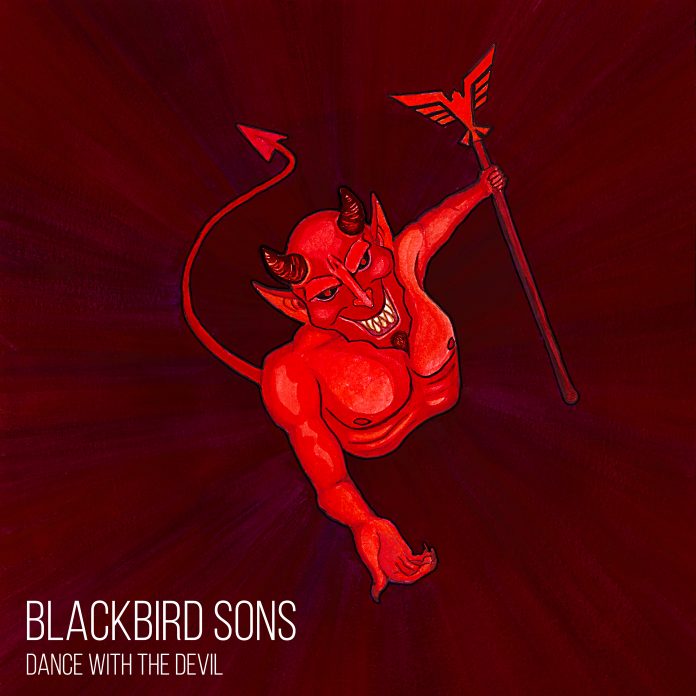 There’s a lot to like about Blackbird Sons and we’ve been on board at MV for a while. The third release of the Finns in three years, “Dance With The Devil” is pretty much everything you’d expect from a record with that title, played by hard rockers.

Or put another way: Back about 18 months ago I reviewed their “Rock N Roll Ain’t Dead” EP, and I wrote this: “The best thing about Blackbird Sons is that they like the same bands you do.” And that applies to these songs – and then some.

See, after two EP’s (both were much fun) they’ve stretched themselves to a full-length, and, its fair to say that Niko Hämäläinen and his boys have enjoyed themselves.

It almost feels like they’ve rifled through their own record collection and come up with 10 songs that they would have bought for themselves, frankly.

I mean, “Wild And Free” doesn’t even bother to hide its love (note, not debt, this never feels like a copy) for AC/DC. But they are powered up (see what I did there……?) and proud as hell.

The title track is a cracker. Part southern rock and part Guns N Roses. Like Slash is wearing a cowboy hat instead of the Top version, there’s also some extremely neat piano in the last chorus giving this a filthy, bar room feel and the fits of giggles at the end tell you that everyone knows that they’ve just done an Axl impression.

The first rule of anything that starts with “let me tell you a true story” is that it is a pack of lies, that doesn’t matter here, though and “On The Run” rockets along and it has to be said that Hämäläinen and Riku Kananoja – his partner in guitar crime – are a formidable pair. This is a record that lives on its solo’s essentially. They are proper arena fillers. “Blackjack” has a proper hand, and on the slightly heavier ones “You Can’t Stop Me” – all fists in the air fury – they do a really good job at echoing the likes of Bonafide.

“Cross The Line” is a ballad for those that truly believe that cowboys ride chrome horses if they are wanted (dead or alive) and I swear to you, I don’t know whether “Running Train” is genuinely the best thing here or is merely that because it’s chorus sounds almost exactly like “Kickstart My Heart”.

“You Really Got It” does some nice call and response guitar, but has lyrics not heard this side of Poison in 1986. The thing is they can do so much better than that, and the very next one, the huge groove of “The Sting” is all the proof you need and even the closing “Too Late”, as warm as a summers day, acoustic and full of harmony, is reflectively superb.

This record is exactly the one that Blackbird Sons wanted to make, and credit to them for that. I can vividly remember buying an album by a band called Johnny Crash in the early 1990s (its got a song called “Hey Kid” on, which still sounds ace!), and telling my mum that I was going to form a rock band. I never did. Blackbird Sons, though, they are our boys and they’ve got our backs. They are the lads living our dreams.