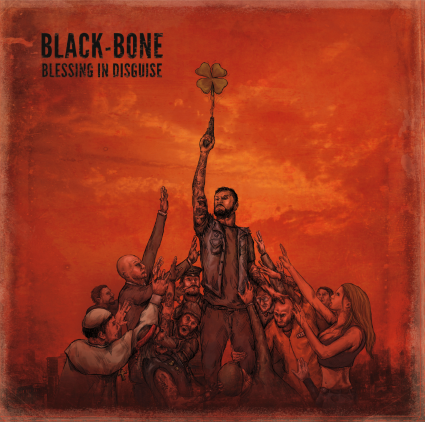 Back in the middle of the 1980’s, those that grew up with glam metal will remember that it wasn’t all poodle perms and spandex. For everyone Poison or Tuff there was a Dangerous Toys or Faster Pussycat, who wanted to underscore their sound with a barely disguised idea that they’d kick your head head given half the chance.

The trio of young men that make up Black-Bone probably weren’t born when MVM was rocking out to those bands way back when, but there’s a real feel, both of that aggression and that era, throughout “Blessing In Disguise.”

Getting Peter Pan Speedrock’s Peter Van Elderen in to perform Production duties perhaps accounts for much of the grit here. His presence has given songs like “Nothing But History” – which would be good enough as just a hedonistic rock n roll anthem – a real Motörhead type groove.

Indeed, impressive hooks abound throughout. “Suicide (Ain’t No Way Out)” has a sledgehammer swagger and “Enemy” is full youthful enthusiasm.

Best of all, though, is “Never Too Loud” which is the band getting their heads down, the horns up and writing their anthem, and if songs like “Ashereah” and “Wasted Years” (not a cover of the Iron Maiden classic either) add a darker feel to the riffs that’s not a bad thing. The latter actually has the feel of an early Alice In Chains song in the vocal delivery of Steef – who performs guitar duties admirably here.

“……Disguise” is not a record that is afraid of much, but it’s certainly happy to stretch out. “Save It For Tomorrow” is one of a couple that are over six minutes long. The other, “Wrong” is an attempt to bring the power ballad back, an enormous affair with clear arena rock ambitions, it serves as a reminder that records like this always had to have a confidence about them, and really sounds like the Electric Boys while it’s about it.

Black-Bone have already played those venues as support to the likes of Status Quo and Chickenfoot, “Blessing In Disguise” serves as notice that they intend to make if being in their own right. It almost grabs you by the throat and insists you listen to it.

So, are Black-Bone the next big things they think they are? Don’t bet against them, that’s for sure.