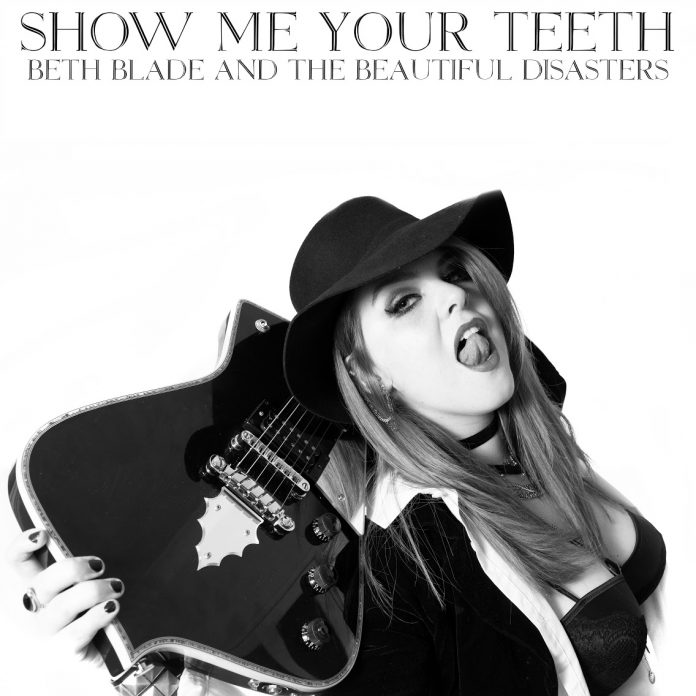 As befits the name, let’s cut to the chase, shall we?

If you want to understand what makes Beth Blade And The Beautiful Disasters so very good, then there’s basically three songs on “Show Me Your Teeth” that I’ll point you to.

The title track is first. An absolutely filthy bluesy riff gives way to a lyric that is equally sleazy. Unapologetic, straight from the Lzzy Hale playbook, it is followed by “Give It All You Got” a righteous thing that could actually have come off Thunder’s “Backstreet Symphony” (Beth was on their recent “Miracle Man” single, but this is one of their rockier things, right here), it features the chorus: “You’ve got to give it all you got, baby live it up, life’s a short stop……” and you just know that is this band’s mantra.

Because, while their frontlady is undoubtedly the focal point – and rightly so to be fair she is a force of nature, right from her slightly unhinged delivery of the opening, visceral “Secrets” – this is a band who have racked up plenty of achievements in the couple of years since their debut.

Try this: KISS Kruise in November 2018 alongside The Dead Daisies, Ace Frehley, and Vintage Trouble, while picking up slots at Planet Rockstock and Hard Rock Hell in 2017. Not for them the idea that you keep playing the same places for years. Rather blade and the boys want to see a million faces and rock them all (as someone might have said back in 1986….)

Which brings us to the third song that tells you all you need to know about Double B and the BD’s. Not only does “I Ain’t Got Nothing (If I Ain’t Got Rock N Roll)” sound like The Amorettes playing a Thin Lizzy song (those double guitars get me every time) but it pinches a line from “Summer Of 69” and more than anything, sounds like the most fun anyone could ever have.

It is far from the only highlight on a fabulous collection. “On And On” sees the vocals soar and the track itself possess the same working class vibe as a re-written “Livin’ On A Prayer”, updated for the 21st century.

That is a mid-paced rocker, and what is impressive throughout is the changes of gear. “You And I” isn’t quite a full-on ballad, but “Crazy” is. Both have eyes on much bigger prizes.

Masters of three-minute rock songs. “You And I” is effectively The Hellacopters, while “Into The Light” is proudly crunching like the 70s has never ended – if their evident love for that decade is obvious anyway, then it is a fact that “1974” makes absolutely plain. The lyrics, though, mention Suzi Quatro, and her influence is all over “…Teeth”.

A 12-song album is longer than many bands do these days, but this is an outfit with plenty to say. “Who Do You Love Now” chugs along in an almost pop-punk fashion, while “Jack And Coke” Thunders along in the sort of metal-cum-glam world of early Motley Crue and when Blade sneers “are your balls as big as your mouth?” it doesn’t sound like she believes they are.

That’s, probably, down to the fact that she’s got a natural self-confidence that many don’t have, but also she knows, deep down, that with a record this good they can’t really fail.

“Show Me Your Teeth” is an album where the bark matches the bite, and it is a brilliant example of what hard rock can be when it is done right.