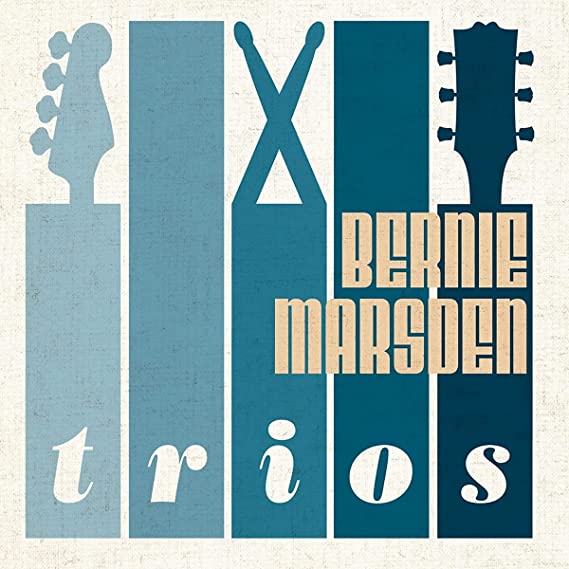 There’s nothing like a power trio. Nothing. There’s something about them that is just right. Perfectly balanced.

Fitting, then, that its with just that that Bernie Marsden ends his “inspirations” series. Following the wonderful “Kings” and “Chess” records the hat-trick is completed, if we may be so crass, with this homage to the three pieces that he’s loved.

And, in the case of one, been in. “Na, Na, Na” recorded by Cozy Powell’s Hammer and which gave Marsden his first appearance on Top Of The Pops in 1974. It’s a Mickie Most produced tune, so you know the drill: it rocks, it rolls and its better than you admit.

Plus the lyrics: “I know what I want and I’ll do what I can. I am gonna get a job in a rock n roll band”. The rest of this writes itself, doesn’t it?

“Black Cat Moan” recorded by everyone, but we’ll centre on Jeff Beck just so we can say that this is better for not having Johnny Depp on the blinking thing, is all you need to know about the album in truth. Whether you know the song or not, this is a master at work. Bernie is the best. Note the first name. You feel like you know him. He’s got a welcome for you through his playing that is always warm.

“Driftin’ Blues” is the perfect slow blues. Clapton’s given it a bash. This one is better. The way Marsden plays. He’s in Rory Gallagher’s class at times. Check the solo. Good grief.

Look, as I always say, I am not a blues purist. I love the genre. But there’s a lot of these I don’t know. “Funk #49” I am familiar with, though. I saw Jared James Nicholls do it and checked out James Gang. This take is different, but any time cowbell gets involved is just fine with me, frankly. Likewise, “Never In My Life” by Mountain should be played at every opportunity. I’d guess too, that Marsden and the band enjoyed playing this one and it sounds like hair is being let down all over the place.

The joy of these, though, surely is discovering something brilliant with Bernie as your guide. “Outside Woman Blues” is new to me, but it’s a beauty, and the word “beautiful” could be accurately applied to the version of Hendrix’s “Drifting”. Floating along as if it has no cares in the world, it’s feel is at odds with the heart-breaking words.

Johnny Winter’s “Rock N Roll Hoochie Koo” funks and struts, and as we mentioned the greatest himself, Rory Gallagher, earlier in this, then maybe Taste’s “Same Old Story” is an apt inclusion. You can’t better perfection (even Marsden would probably agree) but you can add your own thing to it. That happens here.

There’s another Hendrix tune. “Spanish Castle Magic” and its trippyness perhaps show the depth of the material here best of all. Indeed, whether they’re trying to tell us something, who knows, but Robin Trower’s “Too Rolling Stoned” is lovingly done just after.

Legends are all over this album. Some of the greatest ever. That was the point of these three “Inspirations” records, I know that, but lets not lose sight of the fact that the man playing homage here is from the Premier League himself. Bernie Marsden has his heroes, but I hope he knows how good he is too.