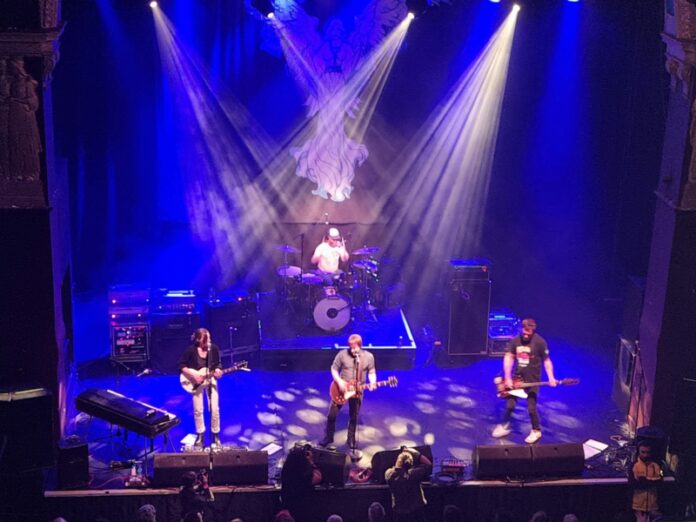 They’ve just played “Shark” when Tim Wheeler – the singer in Ash for 30 years – says “I might as well say this after every song, but ‘here’s something completely different’”. With that they get themselves into the big ballad “Sometimes”. And Wheeler isn’t wrong.

Ash are here as a four piece, with Charlotte Hatherley back in tow, to celebrate (and that seems the right word, to say “play” wouldn’t do it justice) “Free All Angels”, the album that is 21 years old and stands as Ash’s masterpiece.

They know it too, and so does Birmingham given that the Institute’s rarely opened top balcony is in use (and pretty full) and for 45 minutes it’s a chance to relive you youth/listen to some songs they didn’t play much back in the day/see them for the first time (“who’s under 21?” enquires Wheeler and there is a smattering) and there’s a reason why this album still so highly regarded (and possibly more acclaimed now than it was back when it came out too).

As many textures as it has, the thing about “……Angels” is it has just brilliant songs. “Walking Barefoot” builds slowly, then there’s two of the biggest hits, “Shining Light” and “Burn, Baby Burn” (“we normally go off after this one…..” jokes Wheeler, but they are only getting started.

“Candy” does its quasi dance thing, “Submission” is punky, “Shark” has a marvellous twin guitar section with Wheeler and Hatherley locked in superbly. Because of how good this is there are plenty more twists and turns before the end, as “There’s A Star” and “World Domination” round the record out, but the real skill of the band is what’s in the next hour just as much as what had gone before. “Numbskull” is broken up for the Ash V Birmingham screaming competition – it is unclear who won, but it’s loud either way, then “A Life Less Ordinary”, the first song that they wrote when Hatherley first joined the band. Hatherley gets her own moment in the sun a little later, as she plays the solo for “Warmer Than Sun”, a track they put out before “…Angels”, but wasn’t on the album.

The last three of the set need discussion too. A couple from the “Meltdown” album (another underrated record, it seems to be a theme). “Orpheus” – complete with a drum solo from birthday boy Rick McMurray – is a beauty, and “Clones” isn’t far behind.

The set ends with “Kung Fu” – it deserves its place at the conclusion for once – and bassist Mark Hamilton ends in the crowd, seeing his people, and by the way, he plays his bass as If he’s attacking it, it is quite something to watch.

The encore is yet another curveball, “Only In Dreams” a b-side from the “….Burn” single, a Weezer cover, before the words: “Here’s an old one, that I think you might know”. We do. It’s “Girl From Mars.” And, no word of a lie, ten minutes later, when you walk into the street after the show, everyone is singing it, humming it, loving it. It’s a rare gift, one that not every band has, and must be special when it happens.

Three friends from NI that have always been in this band have that ability, they still look like they love it, they still look like they need it, and perhaps nights like this will lead to a little bit of a re-evaluation as to their merits. They’ve always been a little under the radar, but Ash are one of the very best British bands of their generation.