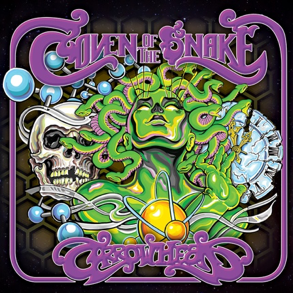 I am basically a wuss.

See, one day, I was round my mates house in the school holidays and he goes: “lets watch this film I got out of the video shop, The Lost Boys”.

For those that don’t know, it’s a (very) mild horror film (with an ace soundtrack) but we got halfway through it and I had to ask him to turn it off. I was finally outed as a right wuss. This was a big thing at 14. To be fair, I was best man at his wedding, so it wasn’t insurmountable – but it probably accounts for why I never watch films to this day.

To that end, I have absolutely no idea what a “Coven Of The Snake” is, and much less desire to find out. Witchcraft, spells, the occult, you can keep it, mate.

However, Arrowhead, get reviewed despite the fact the lyrics scare the shit out of me for one reason. Give me a riff that sounds like Corrosion Of Conformity and give me a singer called Brett Pearl, and I’ll find a way.

The title track here doesn’t half have a dollop of “Wiseblood” era CoC and that’s just fine. It’s even better than fine, actually. Because there’s a bit towards the end when the gear shifts, it has a metal gallop and Pearl – who supplies the guitar here too with Raff Lacurto – lets a lead rip and, brother, you are up for getting in a tour bus with these boys.

Arrowhead first came to my attention three years or so back when they released their second record “Desert Cult Ritual”, and it might be that this one is even better.

“All Seeing Eye” understands dynamics better than most bands of this ilk, and if Pearl wasn’t born to do this, then to be fair it certainly sounds like he was. “Ceremony Of The Skull” – and again, like the title track I am not going to investigate to be honest with you – has a Sabbath thing going on. And as a Brummie I am proud that someone does it so well.

“Ghost Ship” is a rather mighty example of storytelling – more befitting a power metal band than a “stoner” one. The interesting thing about this is  – and I can see why they get lumped in with those bands – is that Arrowhead have the heart of a trad metal band. The way drummer Matt Cramp and bassist Aaron Fletcher combine to drive this is stunning.

“Root Of Evil” proves that they can play with the formula a different way too. Because even when they do the more groovy riffs, they then do real metal lyrics about summoning “beasts” and “demons”.

The reason I don’t understand any of the lyrics here, is probably because I have never flown the “Dopanaught”, which I imagine is about what I think its about, as well as having the incessant qualities of something like, ooohhh lets say “Paranoid”, shall we?

“March Of The Reptiles” would make Lemmy proud, given that it works on the principle that everything should be louder than everything else – although I don’t remember many Motorhead tunes about “Lizard masters”, maybe on a box set?

It even finds the time to end on the epic you sort of thought it had been waiting for. “Golden Thunder Hawk” soars, but only after it has flown through the pit of fiery hell, first.

Arrowhead took seven years between their first and second records, so a two and a half year gap is positively speedy. Like I said last time, though, never mind the frequency, only the quality counts, and “Coven Of The Snake” is absolutely brilliant. Even if you won’t have a clue what its about.