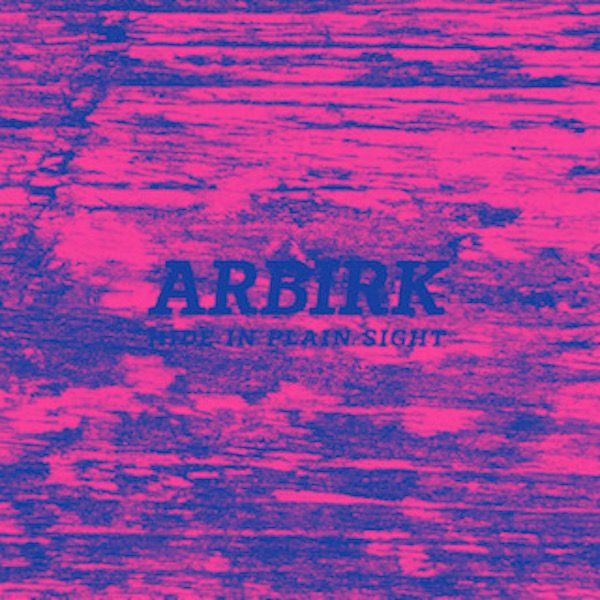 Arbirk are an alternative rock trio and follow-up their 2017 debut album ‘Disguises’ with a new album ‘Hide in Plain Sight’ which touches on topics like forbidden love, death, loving someone at a distance and attempts to deconstruct society’s ideals and values.

A repetitive piano key tone plays before vocals join in on this delightfully stripped back reflective musing called `Twoday` which opens the album and seems to hint at a disagreement or falling out which has gone on for a number of days heading into weeks with the participants incommunicado. At the half way point it erupts almost from the darkness to a more robust quite joyous sound before fading back to it`s original gentle state and leaves you really wanting to know if the issues were eventually resolved. We have a much more upbeat offering with ‘Almost Not Insane’ which has an engaging pulsating driving beat with vocals shared gently atop and seem to refer to an unrequited love.

‘Hold My Hand’ is a quite peaceful like ballad that maybe describes loving somebody who is ill and about to pass from this life. Marie Hageltorn Christensen adds some charming backing vocals that really complement those of Rasmus. I`m sure there was also a toy piano played in the background that added a further poignancy to the number. There`s a strange texture to ‘Happiness is Overrated’ which has all sorts coming in and out with a bass line, synth keys, rolling drumbeats and lyrics that seem to decry successful relationships that could only be shared from somebody who has made a hash of their own, wonderful stuff.

`March / April’  is a quite mesmerising listen with breathy vocals, windswept synth sounds, strummed acoustic guitar riffs in the early part before a drum and more insistent piano tone take over and lead us out instrumentally. I wasn`t too sure as to what the song was about but it might have been a new relationship. There was a kind of fuzzy ambience to `Dawn` but it seemed to encompass so many styles as it evolved with a sort of drum and bass effect, followed by a more dreamy quality before becoming a little rocky. Very compelling and wonderfully odd.

We have another stripped back offering with ‘Philosopher Hands’ with piano, acoustic guitar and synth leading us along and through this curious journey. We have a quite melancholic affair on ‘Broken Relations’ a track that alludes to loving someone from a distance but knowing that this love will never be reciprocated as they are committed to another. I loved the addition of an organ that sounded like an accordion in the dying embers of this piece.

‘Mountaineer’ has a captivating simplicity about it which really drew me in and I found myself almost spellbound. It seemed to be a kind of metaphor on a relationship that could make you want to reach heights you never thought possible. The gently shared ‘Listening to the Tiber’ leads us out of this release and it`s a number that leaves it open to you to take what you want from it or interpret it in your own way.

‘Hide in Plain Sight’ is the kind of album that we seep slowly into your soul. It may need a few listens before it almost takes over your life. The lyrics can be analysed in a number of ways but allow you to derive your own interpretations.

Take time to listen to Arbirk and ‘Hide in Plain Sight’ , I can assure you it will richly reward you