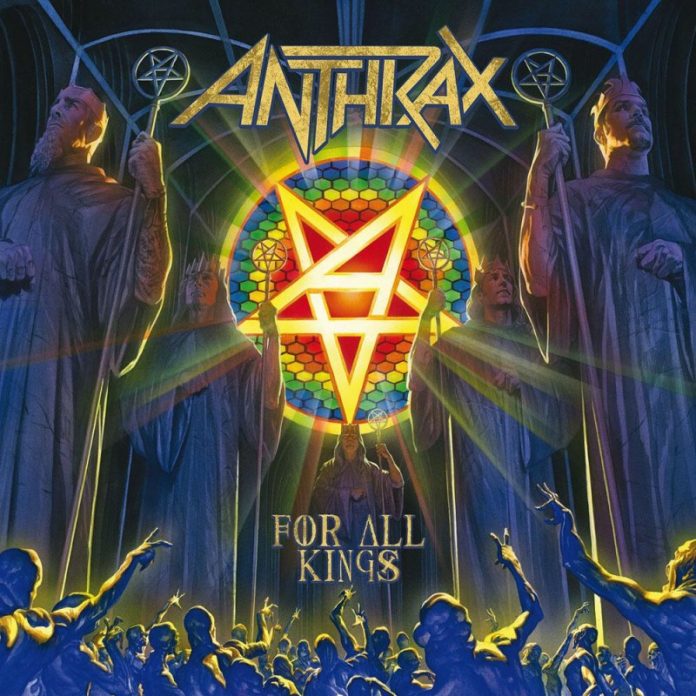 So how do you follow up a classic…..? Come on this is Anthrax, how do you think!?

When they returned in 2011 after an eight year gap with the incredible “Worship Music”, Anthrax reminded the world just how good they were. To call that record a “return to form” is inaccurate, given that firstly there was such a big gap – and so much water under so many bridges – since they’d been around, but secondly because such a phrase would imply they’d ever made a bad record.

What we can say with pretty close to certainty is that, with singer Joey Belladonna back in the fold they seemed more comfortable in their own skin and Scott Ian’s stint in the very wonderful The Damned Things had honed the hooks. The results were superb, and even if they weren’t quite caught in an all-out mosh anymore, in contrast to most of their contemporaries, they could induce one when they fancied it.

The question then, some five years later is a stark one: exactly how do you follow up on such a comeback? The answer, if you are Anthrax anyway, appears clear. With the minimum of fuss you toss one out that’s just as good.

In truth, this has always been the suspicion anyway. The band were confident enough in the new stuff to play one, “Evil Twin” in their support slot to Slayer late last year, it went down a storm, but it’s a measure of “For All Kings” class that the track isn’t even approaching the best on the record.

The fact is that some of the work here is right up there with the best that Anthrax have ever done. “Breathing Lightning” is five and half minutes that is close to perfection, as it builds to its killer chorus and chugs its way through the verses. This is what Anthrax always understood – and the modern version have achieved in a stunning way – that even the heaviest need a hook, and they can write them better than anyone else while still maintaining the ability to thrash.

Take “Monster At The End” it’s unmistakably the work of a thrash metal band, but if videos ever got played anywhere except YouTube, they’d have a number one hit on their hands; a fists in the air anthem, it will burrow its way into your conscience and not leave until work is completed.

It’s far from the only one that one that does this. Belladonna is in fine form throughout but especially on the viscous rumble of a title track, and “Defend Avenge” is a real lesson in violence, with its grandiose opening and chunky riff.

“…..Kings” let’s its hair down too, “You Gotta Believe” is all hi-tops and whirlwind, theres a real sense here that the band, now with Shadows Fall Jon Donais slotting in perfectly, just enjoyed making the record. Certainly something as ambitious as the epic “Blood Eagle Wings” wouldn’t happen unless everyone was pulling together.

“For All Kings” ends with a pair of foot to the floor metal monsters: the closing “Zero Tolerance” has its middle finger in the air and the pit heaving, while the title of the other hits the nail squarely on the head. “This battle choose us” sings Belladona “you give them hell because you must.”

There is no other way it seems. Anthrax signed on for a life of metal, and finally after over 30 years they might be recognised as its Kings.