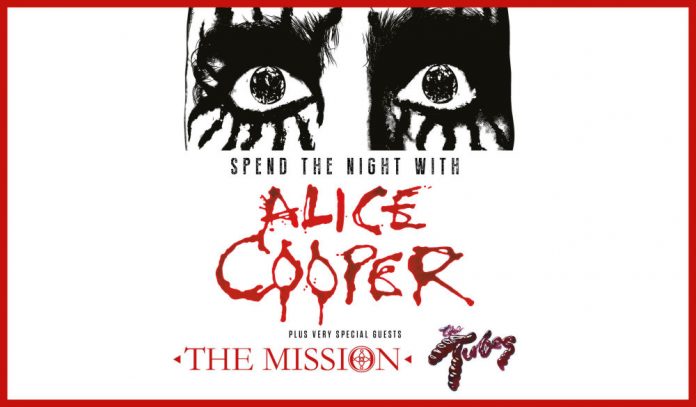 The King of Shock Rock returns to the UK and brings a few old friends along with him.

Alice Cooper has been no stranger to UK shores in recent years but every visit is always a calendar highlight for Maximum Volume Music.  A regular winner of the MVM gig of the year his shows are never anything less that a supreme lesson in hard rock and showmanship and his latest globe trotting adventure is following on from the summer release of his brilliant new album Paranormal.

However before the legend makes an appearance we have the pleasure of San Francisco’s punk heroes The Tubes. Initially decked out in clothing more suited to a promenade, particularly frontman Fee Waybill who ends up with more costume changes in their 9 song set than your average boy band gig, race through their classics like “She’s A Beauty”, “T.V. Is King” and “White Punks On Dope” with the gusto and confidence of a band in their prime. Perhaps after 40 years they are now in their prime. Who knows? What we do know is that they were mighty fine.

If your back catalogue includes tracks like “Mr Hate” and “What Do You Want From Life?” then, to be honest, you can’t go far wrong.

On “Prime Time” vocalist and frontman extraordinaire Fee Waybill offers the audience the chance to “come fly with me” a tempting offer but be warned it’s likely you wouldn’t make it back.  Certainly not in one piece anyway. Guitarist Roger Steen shines, particularly with his soaring guitar solo on the ballad “Love’s A Mystery” but it’s a collective effort and what a collective they are.

On paper second support act The Mission seems like an odd choice given their languid style and lack of theatrics. More akin to darkened theatres and claustrophobia inducing venues than big arenas.  At least that’s the theory.   Maximum Volume saw the band a couple of times last year in more intimate venues and they were outstanding gigs.  It would be difficult for any band to pull off the same kind of feeling or atmosphere, particularly as they are playing to a Cooper crowd, but it doesn’t stop them from giving it a damn good go.   They certainly have the tunes.

The goth rockers perform some of their best tracks starting with anthemic fan favourite “Tower of Strength”.  All the 9 tracks, including a cover of Neil Young’s “Like A Hurricane” , hit the mark with a fiery “Beyond The Pale” being a particular highlight.

Wayne Hussey is in fine voice and full of on stage banter, especially ripping the preverbial out of the fortunes, or should that be misfortunes, of Birmingham’s local football teams.  “Severina” is a delight and set closer “Deliverance” brings down the curtain coming at the tail end of a near faultless triumvirate of “Met-A-Mor-Phosis” and “Wasteland”.

Given that he could probably churn out a greatest hits set that would last longer than a trip round the world,  Alice Cooper peppers his set with a few less well known gems tonight, much to the delight of the thousands of Cooper-philes in attendance, yours truly included.  That said there is a more obvious issue with tonight’s setlist that has yours truly vexed.

Alice’s stunning new album Paranormal, his first new studio album in 6 years, gets blared across the arena as the hordes awaiting the dark lord’s arrival. Unfortunately, it is the lack of tracks from the new release in the setlist with only “Paranoiac Personality” making it in.

With an album this good, that from interviews around the globe Cooper seems rightly proud of,  it’s a shame it’s not promoted more by Alice in his own show.

It is a tried and trusted modern day show opener “Brutal Planet” that gets the ball rolling in predictably splendid fashion.  “Under My Wheels” follows and clearly speaks for itself but then the first curveball comes in the shape of “Lost In America”, a single from Alice’s 1994 The Last Temptation album released when hard rock was on its knees thanks to the grunge wave.

“Pain” is next and so far it’s all about the music with no theatrics, which continues for longer than you would think,  other than Alice’s impressive hypnotic grip on the audience proving that whilst his shows are legendary for their macabre theatrics they are nothing if not backed by some the finest hard rock music there is to offer.

“Department of Youth” and “The World Needs Guts” are given the full monty although the latter is not really an essential track that could in truth be jettisoned for something off the new album. Likewise “Woman of Mass Distraction”, nothing wrong with the tracks themselves but with such a great album fresh in fans minds it would have been great to hear some more of them live. “Rats”, “Dynamite Road” or “Dead Flies” for example would be instant live favourites given the chance so not sure of the logic of not playing more from the new album.  They won’t become the new “classics” if you never play them.

All that aside those in the know are aware that tonight is something more special than a usual Alice show thanks to the reunion of the original Alice Cooper Band for the final five iconic tracks.

The intro to “I’m Eighteen” is the cue for the loudest cheer of the evening as Alice welcomes the original members back into the fold, assisted in no small part by current member Ryan Roxie.

Drummer Neal Smith, bassist Dennis Dunaway and guitarist Michael Bruce all make their entrance and immediately make their presence known. Not entirely in a great way as the next five tracks could best the described as “ramshackled” and “disjointed”. This potentially explains why it’s not a full reunion show. However, that’s not really the point and the fact that the original line-up is back together, minus Glen Buxton who sadly passed away in 1997, is cause for celebration enough.

They tear through the coming-of-age classic “I’m Eighteen”, “Billion Dollar Babies” and of course “No More Mr Nice Guy” with the zeal of their glorious youth.

The closing duo of “Muscle of Love” and “School’s Out” bring an end to an evening, although not without it’s flaws, is a damn sight more entertaining than anything else you may wish to see.